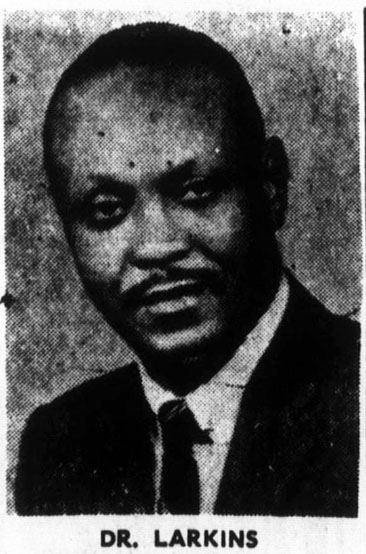 John Rodman Larkins, state government official, was born in Wilmington, the son of Maria McIver and John Larkins. He attended the public schools in Wilmington and was graduated from Williston High School in 1932. After working one year in New York City paving streets, Larkins returned to North Carolina to attend Shaw University under a National Youth Administration program. He received a B.A. in sociology in 1938. Moving back to New York after graduation, he worked for a year in the garment industry. In September 1939 he began graduate study at Atlanta University's School of Social Work, where he was influenced by the dean, W. E. B. DuBois. He received a master of social work degree in May 1941.

Larkins was a welfare worker in Warren County, N.C., for a year before joining the North Carolina Department of Public Welfare in 1942 as a consultant for work among blacks, a position he held until 1962. While working for the state, he continued his graduate studies at the University of Chicago (1947–48) and completed all the course work for a doctorate at the Columbia University School of Social Work (1953–54). He was also a special student at The University of North Carolina in 1951–52.

In 1962 Larkins became the coordinator for civil rights for the North Carolina Department of Welfare (later the Department of Human Resources). From 1968 to 1973 he was the associate director of the state Probation Commission, and in 1973–74 he was director of youth development in the Department of Corrections. Governor James B. Hunt in 1977 appointed Larkins a special assistant to the governor for minority affairs, the post he held at his death.

In addition to his jobs in state government, Larkins served on many state committees and commissions. Governor J. Melville Broughton named him to the executive committee of the Farm Labor Commission, Governor R. Gregg Cherry appointed him to the advisory committee of the state Recreation Commission, and Governor W. Kerr Scott designated him the state's delegate to the annual conference of the National Freedom Day Association. Larkins was a member of the board of trustees of North Carolina College at Durham (later North Carolina Central University) from 1961 to 1977 and served on the North Carolina Good Neighbor Council in the 1960s.

Larkins served in the 1960s as a public member of the U.S. State Department's Selection Board, which reviewed foreign service officers for promotion. He taught part-time at St. Augustine's College and Shaw University. Larkins was a member of the Southern Sociological Society, American Public Welfare Association, National Association of Social Workers, American Sociological Society, Alpha Kappa Delta (honorary sociological fraternity), and Omega Psi Phi fraternity. In 1973 he was elected the first black president of the North Carolina Conference for Social Service. He was a lifelong Democrat and belonged to the Davie Street United Presbyterian Church.

In addition to fellowships from the General Education Board and the National Mental Health Fellowship Act, Larkins received many awards and honors. Wilmington's Business and Professional Men's Club presented him a certificate of merit for public service in 1957, Negro Progress named him Man of the Year in 1958, and the state Generation of Negro Women's Clubs gave him a certificate for meritorious Christian and civic service in 1959. In 1965 a dormitory at the State Training School for Girls in Kinston was named for Larkins. The North Carolina Human Relations Council in 1977 honored him with a recognition banquet, and in 1978 the General Baptist Convention of the state presented him its public service award. Larkins received the state's Elk's Lem Long Humanitarian Award in 1979, and the state Young Democrats Club named him Democrat of the Year in 1980 shortly before his death. He was awarded the LL.D. twice: by North Carolina Agricultural and Technical College in 1958 and by North Carolina College in 1967.

In 1979 We the People of North Carolina commented: "It is quite possible that no other black man in North Carolina's history has been more influential over a longer period of time in changing majority attitudes in the state toward the rights and economic opportunities of black citizens." On Larkins's death, Governor Hunt said the state had "lost its greatest pioneer in the quest for equal opportunities for all its citizens," and the Raleigh News and Observer declared: "This gentle but determined man made his constructive influence felt in local and state race relations during the tense 1960s."

Larkins married Catherine V. Latimer on 29 May 1941. They had one daughter, Sandra. He died of cancer in Duke University Hospital and was buried in Carolina Biblical Gardens, Raleigh.

We the People of North Carolina (October 1979).

a relaative and Fraternity Brother I am just learning about. He had an impact on many .