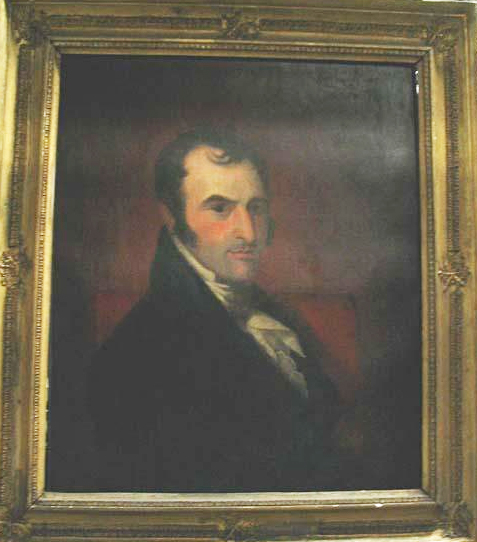 Jesse A. Pearson, legislator, planter, and major general of militia in the War of 1812, was born in Rowan County. He was the son of Richmond Pearson, Patriot leader and soldier in the American Revolution, who moved to North Carolina in the early 1770s and later settled in the forks of the Yadkin at the site of the present town of Cooleemee in Davie County. His mother's maiden name was Sara Haden. Jesse A. Pearson was a brother of congressman Joseph Pearson and a half brother of Richmond Mumford Pearson, chief justice of the North Carolina Supreme Court.

Jesse A. Pearson, a Federalist, served in the House of Commons of the General Assembly of North Carolina (1807–8 and 1812–15) and in the North Carolina Senate (1816). He was an ardent supporter of the need for a convention to revise the 1776 state constitution, a document that gave eastern counties almost complete control of the General Assembly. To keep this control, politicians in the east fought the creation of western and Piedmont counties. This controversy over the county basis for representation and the agitation for constitutional reform led Pearson to introduce a resolution in the 1808 session proposing moving the capital to Fayetteville (the location western legislators wanted) and the calling of a constitutional convention. Introduced the last day of the session, Pearson's proposal to link the relocation of the state capital with constitutional reform was tabled, but it reflected the determination of the west for greater equality in the state government.

In 1814 Colonel Jesse A. Pearson was sent with North Carolina militia under the command of Brigadier General Joseph Graham against the Creek Indians in Alabama. Pearson's militia forces began assembling in Salisbury in January 1814 but arrived in Alabama after the Battle of Horseshoe Bend and Jackson's victory over the Indians. Pearson's men remained near the junction of the Coosa and Tuscaloosa rivers, where more than six hundred Creeks surrendered.

The Indian village where the surrender occurred was called "Cooleeme" and the Creek tribe involved was the "Kulimi." In the Creek language the word perhaps means "the place where the white oaks grew." After his return home, Pearson named his plantation "Cooleemee Hill."

In 1817 Jesse Pearson sold his 2,500-acre Cooleemee Hill plantation on the Yadkin River in Davie County to Peter Hairston of Stokes County. The same year he became very involved in an undertaking to make the Yadkin River navigable for freight and passenger boats. The overall plan, proposed by Archibald Murphey, included river and canal links with the Cape Fear and thence to Wilmington. Pearson, Murphey, and some fifteen other stockholders from North Carolina and Virginia formed the Yadkin Navigation Company with an authorized capital of $25,000. The state appropriated $25,000. Pearson served in a managerial capacity. Despite expert engineering aid and extensive construction, the project failed. The rocky shoals in the riverbed and the effects of the panic of 1819 were impossible to overcome.

In connection with the Yadkin River project, Pearson also helped organize the Clinton Town Company in 1818. The company bought from Joseph Pearson 327 acres in the "the Point" where the South Yadkin River joins the Yadkin and laid out the planned town of Clinton. Forty-six lots were sold. But the panic of 1819 and the failure to make the Yadkin navigable doomed the plan; nothing was ever built there. Most of the land was resold to Joseph Pearson at a greatly reduced price.

After selling his Cooleemee Hill plantation, Jesse A. and Elizabeth Pearson moved to Mocksville and probably built the house, since renovated and enlarged, still standing at 419 Salisbury Street. They had considerable business interests and property in and near the town.

Pearson was married twice. His first wife was Ann Steele, of Salisbury, whom he married on 13 February 1804; she died on 4 October 1804 at age twenty. His second wife, whom he married on 6 September 1810, was Elizabeth Causey Wilson, widow of Hugh Wilson of Mocksville; she died in 1861. No children were born to these marriages.

Said to have been "sudden and quick in a quarrel," Pearson once fought a duel with General Montfort Stokes in which Stokes was wounded. As a young man, he was an avid horse-racing fan and was at one time one of the managers of the Jockey Club of Salisbury and a promoter of the Salisbury races and sweepstakes. He died from injuries received when he was thrown from his horse while returning from Colonel Francis Locke's funeral near Salisbury. Archibald Murphey described him as one of his "fondest Friends and one of the most Correct Gentlemen in North Carolina." In 1859 John Foard, a kinsman and friend, erected a marker to his memory in the Pearson graveyard in southern Davie County.