James Wellborn (Welborn), army officer and legislator, was born in that part of Rowan County that first became Surry County and then Wilkes County in 1778. Here he made his home during a long life, holding public office and operating a large plantation on land that both he and his wife had inherited some two miles from the county seat town of Wilkesboro. In 1800 Wellborn owned 12,321 acres of land and seventy-five slaves. Willie P. Mangum, who visited Wellborn in the spring of 1820, praised the beauty of the Wilkes County area. He further commented: "I have seen in one stock at Col. Welbourns [sic ] 340 Cattle, & 70 or 80 of them that are fattening are in better order than I ever saw any animal of that description. They are raised without expense by sending them into the inexhaustible range of the mountains in the warm season of the year." 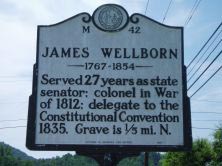 There seems to be no account of Wellborn's parentage, early life, or education, but as an adult he served as a county justice, a member of the board of education, and a trustee of the Wilkesborough Grammar School. He was a trustee of The University of North Carolina from 1804 to 1814. In 1805 Governor James Turner named him one of three commissioners to settle a North Carolina–South Carolina boundary dispute. In 1809 Wellborn and General William R. Davie attended the formal close of the Salem Boarding School and "noted with pleasure the progress made by the pupils." Except during the period 1812–17, when he served in the army, and eight other years, when he was not elected, Wellborn represented the county as a senator in the General Assembly for twenty-seven years between 1795 and 1835. His final legislative service, in 1846–47, was in the House of Commons. As a legislator he worked unsuccessfully to have a road built across North Carolina from Beaufort to the mountains, a route followed many years later by the North Carolina Railroad. Earlier, Wellborn had been a delegate to the Convention of 1835, which revised the state constitution.

During the final months of 1799 the trustees of The University of North Carolina undertook to acquire some land in western North Carolina that was presumed to have escheated to the state and thence to the university as having belonged to Tories—in this case, the Moravians. Through the efforts of Wellborn and his brother-in-law, Montfort Stokes, the university conceded that the Moravians' claim to the land was valid (the Moravians had been more neutral than Tory), and title was restored to the Moravians. Hugh Montgomery, the father-in-law of both Wellborn and Stokes, had once held the land in trust for the Moravians and then bought it.

Wellborn had risen to the rank of brigadier general in the North Carolina militia by 1812, when he resigned to accept a commission as colonel in the Tenth Regiment of the regular army to serve during the War of 1812. At an encampment on Cane Creek in Rowan County, he was responsible for training troops from western North Carolina, South Carolina, and Georgia. From here troops were dispatched as needed in the Canadian theater and against Indians in Georgia and Alabama following a massacre of 283 refugees at Fort Mims.

Recruiting in the Southern Department was one of Wellborn's duties, and he visited Columbia, S.C., Georgia, and the Mississippi Territory to organize recruiting offices. He reported securing 300 recruits in Georgia, 250 in South Carolina, and 500 in North Carolina. His officers spent $60,000 for bounties in North Carolina alone. At recruiting stations Wellborn reported that he employed fife and drum music to attract attention and appeal to patriotism and that "the judicious application of rum" was not overlooked. He was also involved in equipping the troops under his command and eventually accompanied his men briefly for duty in the vicinity of Washington and Baltimore. For the most part, however, he was engaged in recruiting, and his requests for more active duty were not acted upon. His fellow officers reported him difficult to work with and seldom mentioned him. No reference to any commendation for his services has been found, but he is known to have been a diligent, effective worker and quite patriotic.

In February 1813 Wellborn married Rebecca Montgomery, the daughter of Colonel Hugh Montgomery, of Salisbury, a native of England. Her twin sister, Rachel, married Governor Montfort Stokes. The two sisters inherited large tracts of land from their father and, with their husbands, donated land for the town of Wilkesborough. Wellborn and his wife were the parents of several children, but his eighteen-year-old son, James, Jr., died in November 1827.

In a journal kept by Elisha Mitchell in 1827–28 on a journey to the mountains when he called on James Wellborn, he wrote: "What Wellborn's real character is I cannot make out. He has been a member of the Baptist church and will not allow of no swearing about him. He left the church under the idea that he was unfit to remain in it. He seems to have a religious paroxysm." An obituary in an Asheville newspaper noted the he was "highly esteemed for his strict integrity, great liberality and sterling patriotism." Wellborn died at his residence in Wilkes County and was buried in a nearby family cemetery enclosed by a stone wall. In 1992 Wendell H. Edgerton, of Wilkesboro, the owner of a new factory nearby, pleading ignorance, had the cemetery bulldozed and the site leveled.

Documenting the American South. "North Carolina. Constitutional Convention (1835). Journal of the Convention, Called by the Freemen of North-Carolina, to Amend the Constitution of the State, Which Assembled in the City of Raleigh, on the 4th of June, 1835, and Continued in Session Until the 11th Day of July Thereafter." University of North Carolina at Chapel Hill. https://docsouth.unc.edu/nc/conv1835/conv1835.html (accessed June 17, 2014).