See also:
Our State Geography in a Snap: The Piedmont Region
Extended entry on the Piedmont (from NC Atlas Revisited)

Part 3: The Piedmont Region: Economic Center of the State 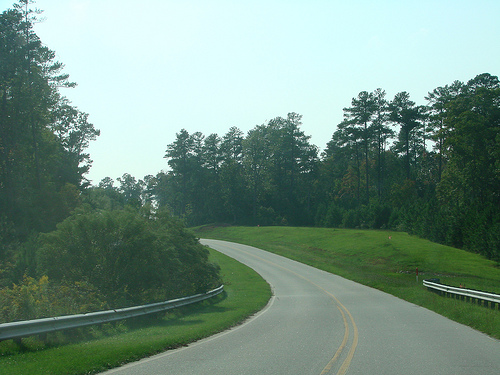 Rising from the edge of the Coastal Plain just east of Raleigh, the Piedmont, which means "foothills," stretches west some 200 miles to the face of the Blue Ridge Mountains. Piedmont terrain is usually gently rolling, varying from 500 to 1,500 feet in elevation, although there are ancient eroded mountain ranges-the Uwharries, the South Mountains, and the Sauratowns-that are scattered across the region and that rise to elevations of over 2,500 feet.

Originally known as the "backcountry" by early European settlers, the Piedmont was opened to settlement during the mid-eighteenth century primarily by immigrants coming south on the Great Wagon Road from Pennsylvania and Virginia. Chiefly Scotch-Irish and Germans, these new settlers poured into the region by the tens of thousands prior to the American Revolution, acquiring small farms, founding villages, and bringing to the colony a diversity of ethnic backgrounds and religions. Craft and industrial centers such as the Moravian town of Salem developed in the colonial era.

In the nineteenth century, the inexpensive and efficient transportation provided by the North Carolina Railroad, which ran from Goldsboro to Charlotte, brought rapid industrial development to the region that would become known as the Piedmont Urban Crescent. Also located along the rail line were textile, tobacco, and furniture operations, the state's historically dominant industries that became the foundation of the state's economy. By 1900 company-owned mill villages, situated near textile mills and housing families of mill workers, had become commonplace throughout the Piedmont. As the economy of the state changed and many mills closed later in the century, these mill villages were often abandoned, although some towns, such as Kannapolis (Cabarrus County), have survived. 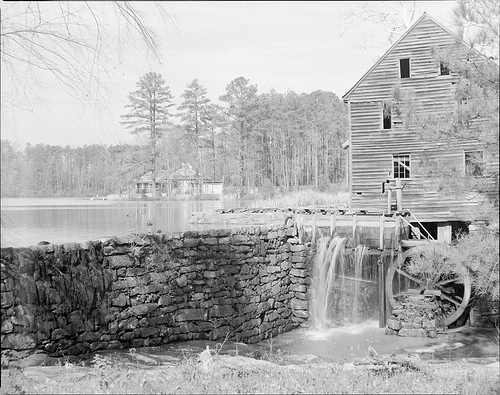 With the exception of the great river systems of the Yadkin, the Catawba, the Neuse, the Cape Fear, and the Roanoke, the narrow, shallow, rocky streams and smaller rivers of the Piedmont provided ideal conduits to be harnessed for water power for grist mills, textile mills, and electricity. Today, hydroelectric and steam generating plants dot the Piedmont landscape, creating great impoundments at Lake Gaston and Kerr Reservoir on the Roanoke River, Jordan Lake on the Haw River, Lake Hickory and Lake Norman on the Catawba River, and Badin Lake and High Rock Lake on the Yadkin River.

The Piedmont consists of 42 counties containing over 22,000 square miles. As of the early 2000s, the majority of the state's population, wealth, and metropolitan business centers, including excellent educational institutions and research centers such as Research Triangle Park (RTP) in the Raleigh-Durham area and Charlotte's University Research Park, were in the Piedmont. Drawing on the resources of three of the state's universities (the University of North Carolina at Chapel Hill, Duke University, and North Carolina State University), RTP has attracted international high technology corporations and has fueled an economic and population boom in that area. Charlotte's development into a national banking and financial center has also stimulated unprecedented growth in the southern region of the Piedmont. North Carolina, particularly in the Piedmont, is rapidly evolving from a rural, small-town environment to an urban landscape, led by these metropolitan areas as well as the Triad of Winston-Salem, Greensboro, and High Point. Consequently, many towns on the outskirts of this growth-textile towns in counties in which manufacturing and other jobs have diminished-have been severely affected, both in economic terms and population.