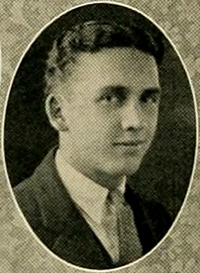 Alonzo Clay Edwards, farmer, Sunday school superintendent, and legislator, was born in Hookerton, the son of Dr. Grandison C. Edwards, a country physician, and Katharine E. Herman, a schoolteacher and daughter of a Methodist minister. Lon, as he was known to his friends, attended school in Hookerton and Trinity College (later Duke University) in Durham. When he returned home from college in 1925, he assumed management of his father's farm and continued to operate farms around Hookerton as a life vocation. On 20 Feb. 1935, he was married to Bettie Hardy Taylor in Duke Chapel, Duke University, by his brother, R. G. L. Edwards, a Methodist minister; they had one child, Alonzo Clay Edwards, Jr.

During the depression of the 1930s Edwards was in the forefront of organized support for agriculture, which led to legislation establishing price supports and the soil bank. In this he was assisted by his friend Harold Cooley, a congressman from eastern North Carolina and chairman of the House Committee on Agriculture. As a member of various farm and business groups, Edwards made frequent trips to Washington to confer with Department of Agriculture officials, Congressman Cooley, and other congressmen and senators. In 1936 he helped organize the North Carolina Farm Bureau in Greenville, serving on the first board of directors and on the first executive committee. In 1938 he was elected representative from North Carolina to the National Farm Bureau Convention.

A lifelong Democrat, Edwards was elected representative from Greene County to the General Assembly in 1941; he was reelected through 1955, when he retired voluntarily. In the Assembly he was chairman of the House Agriculture Committee. This fourteen-year service in Raleigh had a decided influence on his life. His horizon was broadened; his circle of business, political, and agricultural friends became statewide and national; and his visits to Washington became more frequent.

In 1942, Edwards was appointed Sunday school superintendent in the Hookerton Methodist Church. A Methodist since baptism as an infant, he had become a steward in the Hookerton church in 1928; however, this Sunday school leadership role established the basis of state and national service in Methodism. He was district lay leader (1955–61); member of the World Service and Finance Committee, North Carolina Conference (1961–62); five times a delegate to the General Conference of the Methodist Church; five times a delegate to the Southeastern Jurisdictional Conference; and a member of the board and vice-president of the Methodist Foundation, Inc.

Edwards believed in soil conservation and pioneered in conservation work. In 1942, he signed the original petition for the formation of the Coastal Plains Soil Conservation District. From 1961 until his death he served as council member from North Carolina on the National Association of Soil and Water Conservation Districts. His friends in the North Carolina Farm Bureau elected him state membership chairman (1942–48), president (1949–50), and executive vice-president (1957–59). It was while he was executive vice-president that the central office of the State Farm Bureau was moved from Greensboro to Raleigh. North Carolina State University invited him to participate in various programs, including the North Carolina Agricultural Foundation, Inc., and the Agricultural Institute.

In March 1957 Edwards was elected to the board of directors of Tobacco Associates, an organization created to expand the foreign export market of tobacco—the chief money crop in many southern states. He remained on the board until his death. With other officials of Tobacco Associates he made several trips to Europe to promote foreign tobacco sales.

A Mason, a member of the Junior Order, and a man with recognized humanitarian interests, Edwards was appointed a trustee of the Junior Order United American Mechanics Children's Home in Lexington, N.C.; of the Methodist Children's Home in Raleigh; and of the Methodist Retirement Home in Durham. In addition, his legislative experience and broad interests in the public welfare resulted in his appointment to the North Carolina Advisory Budget Commission (1949–57) and to the North Carolina State Board of Education (1943–57). He was also a trustee of Louisburg College (1958–60) and The University of North Carolina (1952–61). The alumni of his alma mater, Duke University, elected him chairman of the Duke National Council (1951–52) and president of the General Alumni Association (1954–55). On 27 Aug. 1965, Governor Dan K. Moore appointed him a trustee of the North Carolina Agricultural Hall of Fame; his term, which was to end 1 Jan. 1971, was cut short by his death of a heart attack.