The Colonial Cape Fear: From Pine Forests to Plantations

Most of the early settlers in and around Brunswick Town came from South Carolina. By late 1726 leading South Carolina citizens were already complaining of the "Desertions from us to Cape Fear which is occasioned by the rigid usage of the merchants and lawyers." This "rigid usage" was due primarily to changes in the colony's naval-stores trade. As England's navy had expanded during the preceding half century, British officials had become increasingly anxious to obtain vital materials from their own colonies rather than from Baltic rivals. They looked to New England forests for masts and spars and to the southern colonies for the huge quantities of pitch and tar needed to protect the hulls and rigging of England's wartime and commercial fleet. Indeed, sailors applied tar with such regularity (much as modern seamen apply paint) that the men sailing before the mast became known collectively as "tars." 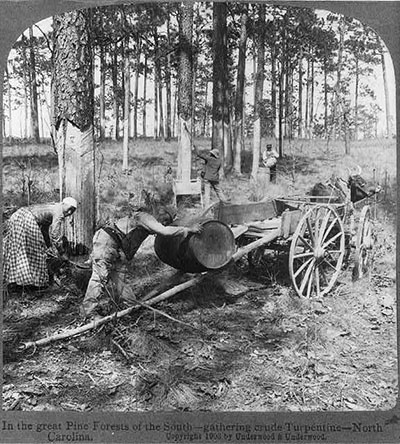 When Parliament began offering bounties on naval stores in 1705, many South Carolina planters made substantial investments in slaves and land. Often, these investments were on credit. The investors planned to pay off their debts with the profits they made on naval stores. But in 1725, after one extension, the Naval Stores Act expired and parliament ceased paying bounties. A half-century of planting had pushed the pine forests back from the navigable coastal rivers, making rice more profitable than naval stores. Without the bounty, exports of tar and pitch from Charleston dropped from 60,000 barrels in 1725 to a paltry 5,000 barrels in 1728.

Normally profitable, the production of naval stores could be less appealing when the price declined. As Governor Gabriel Johnston observed in 1734: "There is more pitch and tarr made in the two Carolinas than in all the other provinces on the Continent and rather more in this than in South Carolina but their two Commodities (tarr especially) bear so low a price in London (1000 Barrels scarce clearing 20s sterling) that I find the Planters are generally resolved to make no more."

Although the naval-stores industry dominated the economy of the lower Cape Fear, a small quantity of rice also passed over the docks at Wilmington and Brunswick Town. In 1768 North Carolina exported only eighty-two barrels of rice, all from Cape Fear. By comparison, South Carolina exported 132,000 barrels in the same year.

Cultivation of Rice in the Cape Fear

Rice cultivation required even more intensive labor than naval-stores manufacture. Only a few of the most wealthy Cape Fear planters owned enough slaves to make rice growing profitable. (Large slave ships from Africa rarely, if ever, visited the North Carolina colony; the ports were too small and the coastline too treacherous. Like other imports, slaves were expensive and often entered the province overland--frequently from Charleston.) Not surprisingly, the roots of Cape Fear rice cultivation lay in slave labor.

"The best Land for Rice," wrote a South Carolinian in 1761, "is a wet, deep, miry soil; such as is generally to be found in Cypress Swamps; or a black greasy mould with a Clay Foundation." Hugh Meredith traveled a short way up the Northeast Cape Fear River in 1730 or 1731 and found that "Boggy" swamps for rice cultivation abounded in the region. After sloshing across low-lying savannahs, he reported that the "Water was mostly ancle-deep on them." It was on land like this that Maurice Moore's brother Roger settled around 1725. By 1735 Roger Moore had named his plantation "Orton" and constructed a one-and-a-half-story brick home. A visitor to Cape Fear recorded in 1734 that Roger Moore, "hearing we were come, was so kind as to send fresh horses for us to come up to his house, which we did, and were kindly received by him; he being the chief gentleman in all Cape Fear. His house is built of brick, and exceedingly pleasantly situated about two miles from the town [Brunswick], and about half a mile from the river, though there is a creek comes close up to the door, between two beautiful meadows about three miles in length. He has a prospect of the town of Brunswick, and of another beautiful brick house, a building about half a mile from him, belonging to Eleazar Allen, Esq." 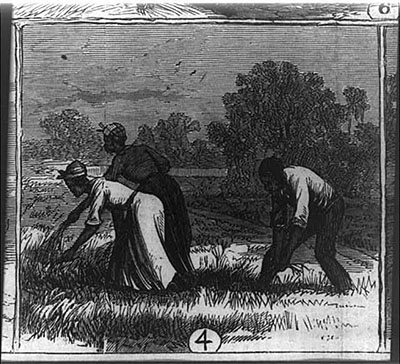 It was by the hoe and the hard labor of black slaves that rice culture took hold in the Carolinas. Regulated flooding of manmade rice fields to destroy weeds became common only in the second half of the eighteenth century, and machines to help pound and clean the rice were also later innovations. Rice production in the colonial Cape Fear -- from planting the grain in the spring to polishing it in the fall -- depended entirely on hand labor. many of the techniques used in the rice fields of colonial Carolina bore considerable resemblance to those used by African rice planters on the Windward Coast. African patterns are discernible throughout the stages of sowing, cultivating, and harvesting. For example, workers experienced at growing rice in western Africa continued to use the same kind of large wooden mortar and pestle when obliged to clean rice in Carolina. Once the husks had been pounded loose, they were separated from the grains by tossing the rice in large, flat, African-style winnowing baskets, woven from palmetto leaves. The wind carried away the loosened stems and husks. The workers then returned the rice to the mortar and pestle and polished the grains with the pestle's broad, blunt end. Each slave usually produced 200 to 250 pounds (about two acres' yield) of polished rice grains for market.

By the mid-eighteenth century, experience in South Carolina had taught profit-hungry planters that African workers enslaved for life were the cheapest form of plantation labor. By the time that the naval stores industry was flourishing and Roger Moore was establishing his rice plantation at Orton, slavery had become entrenched in North Carolina. For many years thereafter, the economy of the colony and state would depend upon the skill and labor of enslaved persons of African descent, who often brought considerable knowledge and ability to the tasks they were forced to perform.

Just before the American Revolution, one observer noted the extraordinary affluence of whites in the coastal Cape Fear region. Ignoring the harsh circumstances of the region's black majority, or perhaps not even counting them as "people," he wrote that there were "fewer of the lower class of country people than [in] any part of the whole province." Though remarkably invisible to this and other white travelers, as well as generations of historians, the African American colonists of colonial Cape Fear did fully as much as the dominant English minority to shape the region's early economic and cultural development.

Learn more about the colonial era in NCpedia:

This material is excerpted from "Pine Forest Plantations."