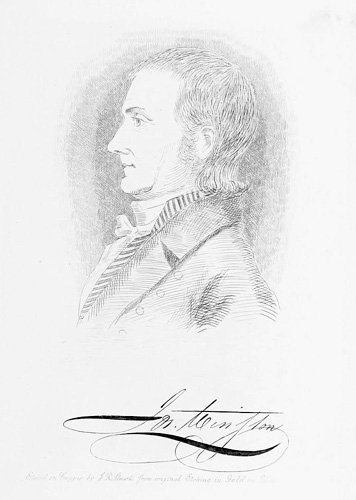 Joseph Winston, Revolutionary patriot, militia officer, legislator, and congressman, was born in Louisa County, Va. His ancestry can be traced to one of three Winston brothers who emigrated from Yorkshire, England, in the seventeenth century. Influential Virginia members of his family included his father Samuel, his aunt (or cousin) Sarah Winston Henry (Patrick Henry's mother), and his uncle Anthony (mentor and benefactor of the giant Revolutionary soldier, Peter Francisco). As a youth Winston fought with the Virginia militia and was wounded during a skirmish with border Indians in 1763. He moved to North Carolina in the late 1760s and by the early 1770s had settled on the Town Fork of the Dan River in Surry (now Stokes) County.

In 1775 Winston was elected a delegate to the Hillsborough Provincial Congress, where he signed the Continental Association, and he and the county's other delegates were constituted as the Surry County Committee of Safety. In April 1776 he represented Surry at the Halifax Provincial Congress and voted to instruct the state's delegation to the Continental Congress to vote for independence. In 1778 he was made entry taker (register of deeds) for Surry County. This position brought him into close contact with the Moravians (Unitas Fratrum ) of Salem, and he assisted them in acquiring deeds to the Wachovia settlement. Although occasionally at odds with the Moravians, especially in his role as a Patriot militia leader, Winston was on friendly terms with them for the remainder of his life. This gave him a substantial base for a lengthy political career.

Shortly after the 1775 Hillsborough Congress Winston was named second major, then first major of the Surry County militia. In February 1776 he led a group of Surry volunteers to fight Tories at the Battle of Moore's Creek Bridge. Later that year he and his men joined a multistate effort against the Overhill towns of the Cherokee. Winston and his force served under Colonel Martin Armstrong and General Griffith Rutherford in subduing the Indians, and Winston participated in the negotiations that led to the signing of the Treaty of Long Island on the Holston on 20 July 1777.

During the remainder of the Revolution he had several opportunities to protect the peace-loving Moravians from marauding militia groups from both sides and to lead Patriot groups against Tory forces in the Surry County region. In September 1780 Major Winston and sixty Surry County militiamen joined Colonel Benjamin Cleveland and his Wilkes County troops. They met with the over-mountain men and joined in the defeat of Major Patrick Ferguson and his forces at Kings Mountain on 7 Oct. 1780. On 15 Mar. 1781 Winston and his militia served under General Andrew Pickens in the Battle of Guilford Court House. Some accounts report that Winston and his men were among the last Americans to leave the battle, and that Richard Talliferro, serving with Winston, was the last American to be killed. Years later Winston apparently was given the rank of lieutenant colonel in the Stokes County militia. In 1812 the North Carolina legislature presented him an "elegant sword" for his military services.

Winston represented Surry County in the House of Commons in 1777, 1779, 1782, and 1783. In 1788 he was a delegate to the Hillsborough convention to consider the ratification of the proposed U.S. Constitution. He voted with the majority neither to ratify nor to reject the Constitution apparently in hopes of forcing either a new convention or the addition of a bill of rights to the proposed document. Winston was also a delegate to the 1789 Fayetteville convention and voted with the majority to ratify the Constitution.

A hardworking state senator, Winston represented the interests of his Piedmont region in a generally Jeffersonian manner. On several occasions he called public meetings to determine the wishes of his constituents on local, state, and national issues. He favored education, limited government, and supremacy of the legislature and opposed the dominance of eastern over western counties. In the national Congress Winston attended and voted regularly, but he served on no important committees and never addressed the body on any issue. He backed the Jeffersonian position on almost every matter on which a vote was recorded. Thus he was an undistinguished but reliable representative. He served twice as a presidential elector, voting for Jefferson in 1800 and Madison in 1812.

In 1784 he became a trustee of the Salisbury Academy, and in 1807 he was tapped by the legislature to serve a six-year term as trustee of The University of North Carolina. In 1809 he was a trustee for the Germanton Academy, located only a few miles from his home.

As early as 1782 Winston owned 980 acres of land and fifteen slaves. In 1790 he had 1,362 acres and eighteen slaves; on his death he left a will in which he indicated ownership of 900 acres in Stokes County and 8,000 acres of western lands. He was married twice, first to Jane Dalton in 1769 and later to Minerva Elizabeth Lanier. His children numbered at least twelve, mostly boys. Triplet sons, Samuel L., Lewis L., and William H., moved to Mississippi and Alabama where one became a major general in the War of 1812, another a state supreme court judge, and the third lieutenant governor. Another son, Joseph, remained in North Carolina and also became a major general in the War of 1812.

I have done a lot of research

I have done a lot of research mainly on Joseph Winston's battles some from primer documents, but you give me the rEason Winston Salem was named for him. his uncle Issac brought his family to the area of what would be Youngsville, n.c. Many plantations were started from those Winstons. Holly Springs has stayed in my family. They started burying there decent ants here. Joseph did not have an uncle named Anthony. Sammual, his father, was Issac, and Nathaniel brothers. Their father was Anthony II who left them orphan early. Every generation usually had an Anthony, but I cannot find the one that raised Peter Francisco (He Put the horse over the Fence, Military History, April 1987) This story says the Anthony was uncle to Patrick Henry. This would not be Joseph's uncle. I think the Anthony they refer to is captain Issac Winston's son. This Winston raised the orphans of his brothers Samuel, etc. This Isaac daughter was Patrick Henry Mother. DollyMadison did to. He had a son named Anthony b. 1723. I can't prove this is the right one for raising the giant. I hope it helps. My direct decentance lay in my land for hundreds of years. I will be the last to hold this land my family fought for. It once was 2,000 acres. Can you tell why I became a historian.