Resistance Before the Revolution: North Carolina Before 1770

While Edmund Fanning was building a handsome new home in Hillsborough and trimming his coats with gold lace in the late 1760s, other newcomers to the Carolina backcountry were having trouble making ends meet. Orange County inventories from the period show that the top 10 percent of all residents holding property controlled more than 40 percent of the total wealth, while the lowest 60 percent controlled scarcely 20 percent of the wealth. Enslaved and indentured workers, with no property of their own, made up the bottom portion of backcountry society. At the top, a small elite was rapidly consolidating its wealth.

The resentment of Carolina freeholders at the rise and ostentation of a colonial elite coincided with the Stamp Act crisis that shook the British Empire in America in 1765. Public dissent swept the colonies that year in response to an imperial tax that many saw as the first step toward the subversion of their liberties as Englishmen. For some, the wave of protest promptly came to embrace the abuse of power within North Carolina itself. Citizens in Granville County petitioned the legislature for relief from the corrupt practices of local officials and were met with libel suits by the officials in return. In Orange County, resistance took root in August 1766, when a group of farmers banded together as the Sandy Creek Association and demanded -- in the language of the Stamp Tax insurgency -- that the North Carolina legislature hear their grievances against local officials who "carry on unjust Oppression." The association's broadside warned that power inevitably corrupts: those "set in Offices and vested with power" will always "oppress if ... not called upon to give an account of their Stewardship." The Sandy Creek Association called on each neighborhood of Orange County to "meet together and appoint one or more men to attend a general meeting" where it could "be judiciously enquired whether the free men of this Country labor under any abuses of power or not."

The general meeting was set for Maddock's Mill, just west of Hillsborough, prior to the November court session. No liquor would be allowed; propositions would be put in writing and debated freely "and proper measures used for amendment." Following procedures similar to those being used by New England townsmen at the same time, the farers planned "in particular to examine into the publick Tax, and inform themselves of Every Particular thereof."

Colonel Fanning rejected the association's "jurisdiction" to discuss public matters and banned the attendance of public officials at the general meeting. To join in the assembly with dissidents would give credence to their grievances, he said, charging that the movement, despite its orderliness, appeared too much "like an insurrection." Throughout the fall the situation deteriorated, as Fanning and his associates retaliated against the organized questioning of increased public fees. Hermon Husband, the prominent farmer who helped form the association and remained active throughout the ensuing controversies, recorded bitterly, "The Bombs [Bums] now grew more and more Insulting, taking Unusual Distresses for Levies; taking double, treble, and four Times the Value."

Controversy Over the Capital 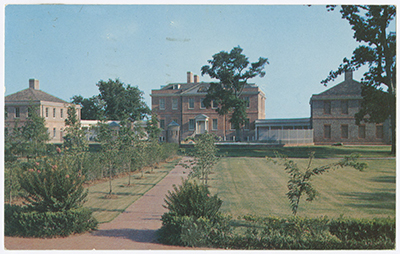 Late in 1766, while most American colonists were celebrating the repeal of the notorious Stamp Act, North Carolina's backcountry farmers were dealt a new provocation. For decades the colonial government had had no fixed seat, but had traveled up and down the seaboard with the governor. A decade earlier, Governor Dobbs had made an effort to stabilize the government and turn a profit by locating the capital upon land that he owned, but authorities in London disallowed the scheme. Already there was growing pressure from the interior to name Hillsborough the seat of government on the basis of obvious population trends. But as early as 1733, some 270 inhabitants of Craven Precinct had petitioned the royal governor to establish the capital at New Bern. "We are sensible Edenton is for many reasons a very Inconvenient Place for the Seat of Government," the petitioners claimed, "and almost as much may be said against settling it on Cape Fear River. Therefore we humbly desire and hope your Excelly will take proper measures for fixing the seat of Governmt near the Centre of the Province which we suppose is on the South side of Neuse River." In December 1766 the North Carolina Assembly, dominated by planters and merchants from the east, attempted to "settle" the controversy: it appropriated £5,000 for the construction of a permanent mansion for Governor Tryon at the coastal town of New Bern.

Early in 1768, as John Hawks began to lay out his elaborate complex in New Bern, “the Rumour of giving the Governor Fifteen Thousand Pounds, to build him a House,” had reached the backcountry. What Tryon would call “a lasting Monument of the Liberality of this Country” seemed an expensive abomination to settlers in the west. Indeed, wrote a Mecklenburg County resident in a letter to the Boston Chronicle, “not one man in twenty of the four most populous Counties will ever see the house when built.” The slaveholding planters and established merchants of the eastern counties would keep the seat of colonial government in the east and tax the more numerous backcountry farmers for its creation. Word of this decision, coming on top of the harsh existing grievances in the piedmont, simply confirmed the spreading belief that the governor and members of the Assembly were men “whose highest Study is the Promotion of their Wealth; and with whom the Interest of the Publick, when it comes in competition with their private Advantages, is suffered to Sink.”

New Bern was an acceptable site for a colonial capital in the eyes of the powerful planter interests of the northeast and southeast, with their differing origins and economies. But for the underrepresented settlers in the western Piedmont, it seemed a real and symbolic offense. The proposed dwelling, which soon came to be called “Tryon’s Palace,” gave added focus to the discontent of backcountry tax payers. It linked their grievances against local authorities to the colonial officials on the coast who had appointed them. Moreover, it joined the matter of how public revenues were collection with the question of how public funds were spent.

Rise and Fall of the Regulators

As a new wave of dissent swept the backcounty, the organizers began to call themselves “Regulators.” The term had been used by farmers in England’s Thames River Valley several years earlier and was in current use in South Carolina. There it was applied to the backcountry elite who wished to “regulate” their social inferiors and impose law and order in the wilderness counties. In North Carolina, in contrast, those called Regulators – following a long colonial tradition of organized public opposition to misrule -- sought to regular flagrant abuses of power by their social superiors.

Within five years of the Battle of Alamance, major actors in the War of the Regulation had left the colony. Hermon Husband escaped certain execution by fleeting to Pennsylvania, where two decades later he would lead another uprising of backcountry farmers, the Whiskey Rebellion. Other Regulators dispersed to the north and west, while some of the officials whose high taxes and contempt had goaded farmers to fury also left the region. Tyree Harris moved to Caswell County, Edmund Fanning returned to the North as secretary to William Tryon, who became the last colonial governor of New York. When rebellion swept all the colonies in 1776, many such antagonists of the Regulators joined the Tory side.

Was the Regulator Movement crushed in 1771 a rehearsal for the Revolution? Colonists elsewhere were growing more shrill in their attacks on British corruption and more open in their defiance of imperial rule. By 1775 extralegal committees and conventions controlled and regulated life throughout the American colonies: they supervised courts, dictated appointments, commanded militias, and levied taxes. The goals of some of the armed and extralegal committees of the rebellion could not have displeased the Regulators. The revolutionary convention from Mecklenburg not only opposed "everything that leans to aristocracy or power in the hands of the rich ... exercised to the oppression of the poor," but also favored the exclusion of lawyers, clerks, and sheriffs from the legislature.

Yet, for all the radicalism of their rhetoric, many who joined the independence movement against England wanted no part of a social revolution at home. An authentic civil struggle, modeled on the Regulator campaign against the "rich and powerful" -- against the "designing Monsters in iniquity" who through fraud and "threats and menaces" extracted their "Fortunes ... from others" -- held no charm whatsoever for the planters and merchants who assumed the leadership of the patriots in North Carolina. In the end, neither the Regulation nor the Revolution settled the question of whether the public or the privileged would rule. A standoff in the 1770s, that battle was destined to be fought again and again by North Carolinians and Americans for generations to come.