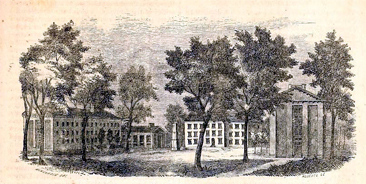 Anderson Mitchell, lawyer, judge, and legislator, was born at the family farm near Milton, Caswell County, the son of David, Jr., and Ann Anderson Mitchell. He attended Bingham School in Orange County and was graduated from The University of North Carolina in 1821. He served as a tutor in 1821–22 and received an M.A. degree in 1824.

Admitted to the bar, Mitchell was elected to the House of Commons from Ashe County in 1827 and 1828 and to the state senate in 1829. In 1830 he moved to Morganton and began to practice law. In the same year he was appointed attorney for The University of North Carolina Board of Trustees, a position he held until his resignation in 1834.

In 1831 Mitchell moved to Jefferson, where he became clerk of the superior court; he served until his relocation in Wilkesboro in 1835. In 1840 he won another seat in the state senate. In 1842 he was appointed to the Twenty-seventh Congress to fill the unexpired term created by the death of Lewis Williams. Defeated for reelection by Governor David S. Reid, Mitchell resigned his office to continue his law practice.

Mitchell was elected again to the House of Commons in 1854 and 1856. Moving to Statesville in 1859, he was elected once more to the state senate the following year. In 1861 he was chosen a delegate to the Secession Convention of 20 May and voted against the Ordinance of Secession.

Until the end of the Civil War, Mitchell remained a devoted member of the Whig party. In 1866, however, he accepted an appointment to the Wilkes County Superior Court under William Woods Holden, the provisional governor, and was elected to the post on the 1868 Republican ticket. In subsequent years he was reelected as a Democrat, although he preferred to be called a Whig.

Mitchell's years as a superior court justice were perhaps the finest of his public career. Distinguished by his integrity and respected for his courtroom skills, he found that the postwar atmosphere of Wilkes County presented a special challenge. Roving bands of Confederate and Union deserters and rising Ku Klux Klan activity threatened to push the county into anarchy. But by dispensing justice without favoritism or malice, he helped bring order to the state's troubled western counties and diminished the influence of the Klan. Similarly, Mitchell's injunction forbidding payment of the state militia during the Kirk-Holden war of 1870 helped end that divisive conflict and clearly demonstrated that he would not allow political pressure to influence his interpretation of the law.

Mitchell resigned from the court in 1875. He died the following year, at age seventy-six, after an illness. Over six feet tall but frail from childhood, Mitchell maintained his sharpness of mind until his last year. He never married. He attended the Presbyterian Church of Statesville and was buried there.

Nancy Alexander, Here I Will Dwell: The Story of Caldwell County (1956).

Duyckinck, Evert A. (Evert Augustus). Cyclopaedia of American literature; embracing personal and critical notices of authors, and selections from their writings. From the earliest period to the present day; with portraits, autographs, and other illustrations. Vol. I. New York: C. Scribner. 1856. 105. https://archive.org/stream/cyclopaediaofame02duyc#page/104/mode/2up (accessed December 27, 2013).