Seed of a Tobacco Empire 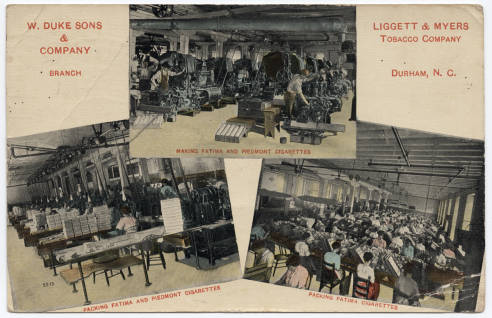 Washington Duke did not convert his farm to manufacturing overnight, but gradually the family homestead became an industrial plantation. Visible at the Duke Homestead and Tobacco Museum today is a small log structure comparable to that which served as the family's first "factory." In such a shed, Duke and his two young sons hand-processed 400 pounds of tobacco a day. Able in 1866 to manufacture and market 15,000 pounds of his brand, Duke converted a nearby stable into a second makeshift factory in which he produced 125,000 pounds of smoking tobacco. Wagonloads of cured and dried tobacco were brought in through its wide doors, hung from tier poles held by the rafters, and kept moist by the opening and closing of small ventilating doors in the attic. The factory's equipment was suited to hand production: flails, sieves, work tables, weights and scales, barrels. By the 1870s young black workers had replaced Duke's teenaged sons at hand labor. Workers flailed the leaves into granules with wooden sticks and then sifted the crumbled leaf through rapidly shaken screens. Duke's helpers and his daughter Mary packed the granulated smoking tobacco into homemade bags and Pro Bono Public—"For the Public Good"—was ready for sale.

Competition drove the Dukes to innovate. Despite the expanded sales of the family's smoking tobacco, purchases were far from enough to please Washington Duke's youngest son, James Buchanan Duke. By 1880 the rugged and ambitious "Buck" Duke had had enough of chasing the tail of Bull Durham. In the rivalry for the smoking tobacco market, the Duke company was "up against a stone wall." The younger Duke decided to gamble on a product that had yet to achieve widespread popularity: "I am going into the cigarette business." 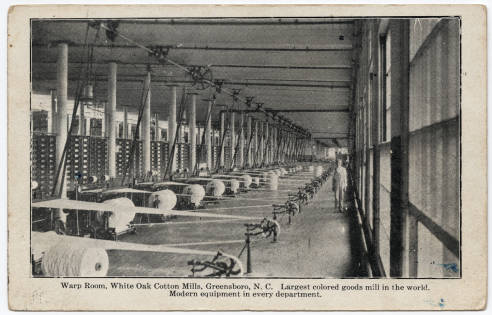 Mechanization revolutionized work and the workplace. The skill and judgment of the cigarette hand-rollers were no longer needed; displaced and embittered, the immigrant craftsmen returned to New York City. The craftsmen were replaced by the Bonsack machines, each of which did the work of forty-eight skilled laborers. The sophistication of the equipment, which can be viewed today in modernized form at tours of major Piedmont factories, was a marvel to behold. Without human intervention it automatically fed the tobacco into the machine, made cigarettes faster than the eye could see, loaded the finished cigarettes onto a tray, packed them into boxes, pasted labels on the packs, and placed the packs into cartons. So automated was the equipment by 1900 that one worker recalled, "When the work went well, we didn't do a thing!" Only a handful of skilled and highly paid mechanics was needed to repair and maintain the equipment.

For many, the first public work was in a textile factory, and the first place they moved to was a mill village. Most of the early factories were located in the Piedmont, where a plenitude of rivers supplied waterpower to drive the machinery of the mills. Factory owners built entire communities in the countryside for their employees and hoped that the rural setting, "comfortable habitations," and neighborliness of village life would ease the transition from farm to factory.

Glencoe, nestled in the heart of the Piedmont, typifies these self-enclosed mill villages. Located three miles north of Burlington, it hugs a gentle stretch of the Haw River, where the original factory still stands. Though the mill ceased operations in the 1950s and though most of the homes and company buildings are no longer in use, Glencoe remains much as it was in the 1880s, when it was constructed by James and William Holt, descendants of Alamance County's antebellum textile pioneer, Edwin M. Holt. The mill produced bright and multicolored "Glencoe Plaids" and durable "Deckedout Denim." The mill building, the mill office and company stores, the two-story workers' homes, the village barbershop, and the lodge hall have survived for a century.

At Glencoe, Robert Holt, son of the founder, lived in the village. He knew all the employees and their children by name. Despite Holt's wealth and authority, he seemed "just like one of us," a resident recalled. In other mill villages, owners dispensed paternal gifts. One saw to it that all his female workers received a parasol at Christmas—which he delivered personally from house to house—and chartered a private train for picnic outings on the Fourth of July. Others shared wood or coal with employees in the event of a harsh winter. 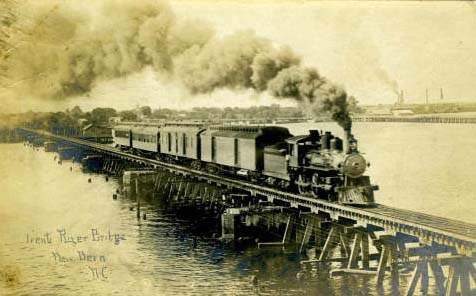 But paternalism involved more than gestures of generosity. It also meant control and intrusion. In several villages the patriarch roamed the village at night to make certain that lights were out by 10:00 p.m. He evicted people who misbehaved and brooked no challenge from "his" people in "his" village. In return for benevolence, the owner expected and often received the loyalty of his employees: a faith that the company would take care of its family of workers and do right by them. Loyalty often diminished the demand for wage increases, as did the custom of renting workers' homes for a dollar a week and providing many village services "free." Few factory owners saw themselves as padding their profits through paternalism. In their view the hard work they required and the moral supervision they provided built character. Employees who labored like the devil were on the road to heaven.

Role of the Railroads

From its opening in 1896 until the middle of the twentieth century, Spencer Shops—in the words of one of its admirers—was a "railroad fan's dream come true." Located in the Piedmont just two and a half miles northeast of Salisbury—and now operated as the North Carolina Transportation Museum—Spencer Shops was the massive central repair facility of the Southern Railway Company.

Southern Railway's thousands of cars and hundreds of locomotives rumbled over 8,500 miles of track that spanned the region from Washington to Atlanta, Charleston to Knoxville, and westward to Birmingham and the banks of the Mississippi River. Crowded into Spencer's 168 acres were locomotives by the scores bustling over miles of yard tracks, an immense roundhouse and turntable, and a five-story Back Shop filled with huge cranes and winches.

By the time Spencer Shops opened in the late 1890s, railroads in North Carolina and in the South had come of age. The expansion had not been easy. A half-century before, North Carolina had struggled to complete even a few hundred miles of track to connect Wilmington and Weldon on the east coast and to link the Piedmont towns of Goldsboro, Raleigh, Greensboro, and Charlotte from east to west. In the fifteen years following the Civil War, despite the sale of the state-owned North Carolina Railroad to the larger Richmond and Danville line, little of the private capital needed for expansion could be found in the state or lured from outside. But between 1880 and 1890 investment poured into North Carolina, and railroad mileage more than doubled.

The Southern Railway and Spencer Shops were the result of a successful effort to consolidate and control a bankrupt earlier line. The predecessor line had overbuilt and nakedly plundered its stockholders during the railroad boom of the 1880s. Incorporated in 1894, the Southern was ruled by Samuel Spencer, a Georgia-born engineer with a degree from the University of Virginia, who in the eighties was president of the Baltimore and Ohio (B&O) Railroad.

Well into the twentieth century, Spencer Shops flourished as a double-edged emblem of power. It pulsated with the new energies that the railroad had released within the state. And it stood for the profound power of corporations to shape the fate of North Carolinians from outside.

Explore these NCpedia articles to learn more about North Carolina 1870-1920: