Subsisting on the land: "Hog and Hominy" Days

Following World War II, nostalgia had transformed the hardships and deprivation of the depressed years between the two world wars into "hog and hominy days," when sturdy yeoman families lived contentedly on the simple abundance of nature. Old-timers in an urban and industrial age remember with special fondness the farm barns of their adolescence, the big cornfields, the vast cribs where the corn was stored, and aromatic smokehouses in which corn-fed pork was cured. During the depression years, as in earlier times, cattle and hogs foraged for themselves in woods and fields and returned in the evening to the high-pitched summons of the cattle call and "coor pig" that resounded across bucolic distances. In the fall, hogs were penned and fattened on "slops" from the kitchen, sweet potatoes, and such corn as was unfit for either people or cattle. 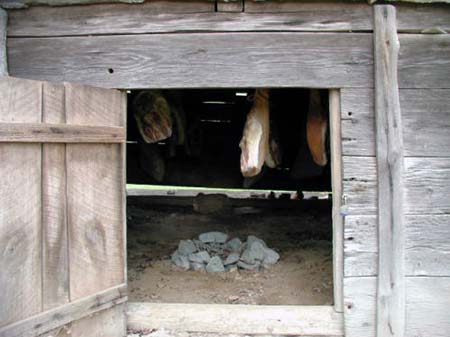 The careworn sentinels of "hog and hominy" days still dot the countryside of rural North Carolina: old and decayed tobacco barns, the crumbling remains of livestock barns, hogpens, privies, the shells of abandoned dwelling houses. "It's amazing how many tobacco barns you see when you drive through the Carolinas," reported one visitor. "There's several sitting around every house. Looks like everybody there must be a tobacco farmer." The livestock barn usually included a central passageway that separated cow stalls on one side from mule or horse stalls on the other. But the gambrel roof also covered storage space for feed, tools, and machinery. Here cows were milked, horses shod, equipment repaired, sick animals treated. But it was also the place where one might "pull up a bale of hay," as one farm lad recalled it, "just inside the door during a rainstorm and listen to the rain on the roof while you communicated with your soul." It was where children played hide-and-seek or performed rafter acrobatics with the hay as a cushion against any mishap, where dignity was recovered after a personal setback, and, like as not, where love was made.

Tobacco and cotton were grown throughout much of the state, and by the 1920s North Carolina had the largest tobacco and second largest textile industry in the nation. But heavy concentration on nonfood crops lay at the root of the central paradox of the time: North Carolina, despite its devotion to agriculture, was a heavy importer of food. Much of what might have been profit was absorbed in the purchase of food and feed that could have been produced cheaply and in abundance at home. Dependence on nonfood crops also meant that farmers had ready money only for a while after a harvest and lived on credit the rest of the year.

The work of cultivating, harvesting, and curing tobacco was an eighteen-hour-a-day ordeal. Seeds planted in a cloth- or mulch-covered bed for about two months were transplanted into rows that had to be repeatedly cultivated to loosen the soil and keep out weeds. When the plant bloomed, the bloom was cut off to allow the upper leaves to develop. This "topping," like "suckering" (removing lateral shoots) and "priming" (picking the leaves as they ripen), was also hand labor. The leaves, often up to 150,000 to an acre, were then sledded to the barn, strung in bunches on sticks, and hung on rocks for curing. 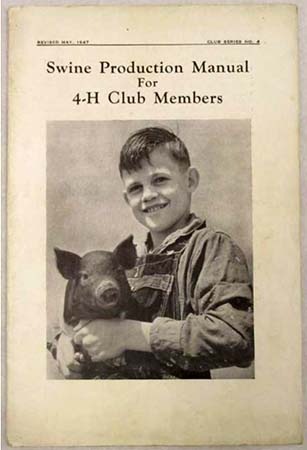 Clarence Poe and the Case for Interdependence

Some analysts simply wrote off the small farmer as a doomed species. Clarence Poe, a Chatham County native and product of a one-room school there, followed the drift of the times in this regard. After becoming editor of the Progressive Farmer, an agricultural newspaper in Raleigh, in 1899, he built it into one of the great mass-circulation farm journals in the world. But Poe's editorials, perhaps reflecting his experience with small-farm America while coming of age in Chatham County, evolved in favor of the large farmer, the most cost-efficient unit. It seemed useless, after all, to preach of tractors and combines to those for whom a good mule was still a status symbol, fruitless to sing the praises of indoor plumbing to those not able to own backyard privies.

Other authorities felt they saw a possible salvation for the small farmer but were puzzled as to how it might be achieved.

A more effective mode of interdependence in the 1920s, however, was that facilitated by what is now the Agricultural Extension Service. This service was jointly created in 1909 by the State Agricultural and Mechanical College at Raleigh (now North Carolina State University) and the U.S. Department of Agriculture. By 1923 the extension service had "county agents" in three-quarters of the state's 100 counties. Most counties also had female demonstration agents who promoted rural home improvement. Boys' Corn Clubs and Girls' Canning Clubs (later known as 4-H Clubs) were extension groups that paralleled the adult programs.