The Great Wagon Road: From Northern Colonies to North Carolina

From Northern Colonies to North Carolina 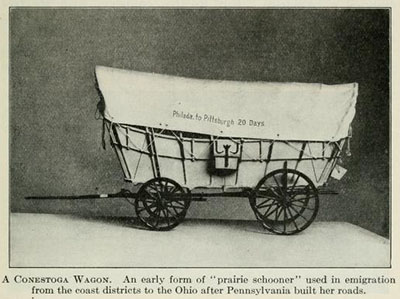 The movement of the Scotch-Irish and eventually, of German immigrants southward can be measured by the progress of the Great Wagon Road. After 1735, as the supply of land grew short in colonies farther north, numerous farmers from Pennsylvania, Maryland, and Virginia began packing their possessions and making the long journey to the North Carolina Piedmont.

The Great Wagon Road started at the Schuylkill River in Philadelphia and would one day stretch all the way to the Savannah River at Augusta, Georgia – a distance of over 735 miles. In the 1720s, however, the road extended only to the Susquehanna River in Lancaster County, Pennsylvania. By 1760 the road had passed through the Moravian settlement in Forsyth County and extended as far as the town of Salisbury, in Rowan County. From there it continued its southerly course through South Carolina and finally ended at Augusta, Georgia.

At first the migrants were predominantly Scotch-Irish. Then, in the mid-1700s, Pennsylvania Germans joined their neighbors on the tedious trek. As newcomers flocked southward, the population of the North Carolina backcountry grew at an unprecedented rate. The path to Carolina came to be called the Great Wagon Road. "The country," wrote colonist Nathaniel Rice in 1752, "is in a flourishing condition, the western parts settling very fast."

The diverse backgrounds of the immigrants shaped the North Carolina backcountry into a patchwork of religious and cultural enclaves. Many newcomers from Pennsylvania were Quakers. Newly arrived German families were predominantly Lutheran, with the notable exception of the Moravians. Immigrants of Scotch heritage were almost invariably Presbyterian. In addition, the Great Awakening, a tremendous religious revival that swept the English colonies in the mid-eighteenth century, resulted in the founding of several Baptist churches in the Carolina backcountry.

The Presbyterian Scotch-Irish were among the first Europeans to settle in the rolling hills of the North Carolina Piedmont. (The Scotch-Irish were actually Lowland Scots who had moved to the region around Ulster, in Northern Ireland, in the seventeenth and early eighteenth centuries.) Surprisingly little is known about these early immigrants. Some of them were second-generation Americans whose parents had settled on the rich farmlands of Pennsylvania. Others were newly arrived migrants from Ulster who had landed in Philadelphia and immediately journeyed south. The Scotch-Irish appear to have taken up land throughout the North Carolina Piedmont, but, because they left so little evidence behind, the number that came to the colony is uncertain.

During the mid-eighteenth century, Pennsylvania Germans began joining the Scotch-Irish on the long journey down the Great Wagon Road to North Carolina. For several decades after the settlement of New Bern in 1710, few Germans had entered the colony. But, by 1748, Germans too were being forced southward by the shortage of land in Pennsylvania.

On arriving in North Carolina, the Germans tended to cluster in communities where they shared cultural traits such as language and religion with other Germans. Although they took up land throughout the Piedmont, German immigrants favored the region we know as Rowan, Cabarrus, Davidson, and Davie Counties, between the modern-day cities of Winston-Salem and Charlotte. A large number of Germans settled in Alamance, Guilford, and Orange Counties as well. Much of the land in these counties belong to Henry McCulloh. Because of a complex set of arrangements between McCulloh and Earl Granville, settlers who bought land from McCulloh often faced a brutal succession of fees. These included paying McCulloh for the land, paying Granville’s agents for recording the sale in the county courthouse, and, finally, paying annual quitrents to Granville. Many of these fees, submitted to dishonest officials like Francis Corbin, owner of the Cupola House in Edenton, were illegal and extortionate. 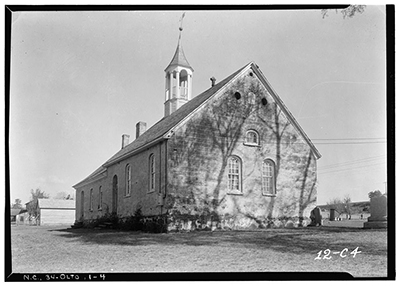 Unique among the German settlements was the Moravian community that grew up on the Wachovia Tract in present-day Forsyth County. The United Brethren, often called the Moravians, originated in fifteenth-century Bohemia, the region we know today as the Czech Republic.

This first Moravian settlement is now an archeological park near present-day Winston-Salem. Although a few eighteenth-century buildings have survived intact, the ruins of many structures have been excavated and stabilized. Here visitors can see the foundation of the original Brothers' House, the first building constructed in Bethabara.

With the creation of a larger, more commercial Moravian settlement at nearby Salem in the 1760s and 1770s, another "God's Acre" would be created. "It is our opinion," declared the Moravians about establishing Salem, "that Bethabara should be a farming community, not a commercial center, as otherwise there is a danger that building and growth there might stand in the way of the new town ... Furthermore, it was determined by lot that we are to let our Brethren and Sisters in America know that the Saviour wills that Salem is to be the place in Wachovia for commerce and the professions, and they are to be moved thither from Bethabara." For over two centuries, deceased members of the Salem congregation have been brought to "God's Acre" from the church in town, accompanied by a small brass band, and laid to rest on the hillside. Each departed Moravian is buried not in a family plot, but among the choir members with whom they lived and worked: single men, single women, married men, or married women.

Indians described the town of Bethabara as “the Dutch fort where there are good people and much bread.” Moravian records state that around noon of 4 March 1758 some thirty Cherokees arrived in Bethabara “pretty hungry” and were given dinner at a cost of eight pence each and supper at six pence each. A month later, sixty Indians appeared in the town. The Cherokees who visited Bethabara in 1774 and heard an organ playing were certain that children were hidden inside the instrument singing. The Moravians opened it for them to see that there was no deception.”

Clearly, the United Brethren at Bethabara were different from other mid-eighteenth-century colonists in the North Carolina Piedmont. They refused to bear arms; they lived communally; they called each other “sister” and “brother.” But, despite their differences, the Moravians also had much in common with the settlers around them. Like their Scotch-Irish and German neighbors, and like the Highland Scots in the upper Cape Fear region, the Moravians were first attracted to North Carolina by the availability of vast tracts of land. Also like many of their neighbors, they had migrated from Pennsylvania and did not adhere to the Anglican faith.

Read more about the Great Wagon Road in NCpedia:

I am researching the development of the Parramore family.. I am looking for details of the family in the early years so as to trace its migration from the eastern shore of Virginia into North Carolina. Please share with me suggestions of records, etc that may be relevant.
Thank you for your response.

Because you did not leave an email address, we cannot help you directly. If you would like to communicate with our reference librarians anout the Parramore family, you can contact us at https://statelibrary.ncdcr.gov/contact-us/contact-form