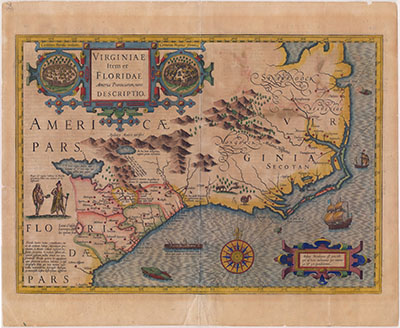 The first European explorers of North Carolina, like all early voyagers to the New World, did not find what they were actively seeking. Initially, they envisioned the discovery of an ocean pathway to the treasures of the East. It took Europeans almost a century to adjust their maps and their minds to the reality that they encountered on the Carolina coast: the sweet-scented edge of a massive continent.

The French hired their own skilled Italian navigator -- Giovanni da Verrazzano -- and commissioned him to explore unknown latitudes in the western Atlantic in search of a northerly route to China. In 1524 the hundred-ton ship La Dauphine sailed with a crew of fifty aboard, intending to reach China by sea. If blocked by "a barrier of new land," Verrazzano was to search for a "strait to penetrate to the Eastern Ocean."

Looking for China, the explorer had encountered what would later be North Carolina. His initial landfall was somewhere along the coast north of Cape Fear in what is now New Hanover County. But, like Columbus, Verrazzano searched for signs that he had reached some outer tip of Asia. He reported that the inhabitants "resembled the Orientals, particularly those from the farthest Sinarian regions" and that the ground was of a color that suggested gold. He noted "palms, laurel, cypress and other varieties of tree unknown in our Europe" in the fragrant forests he and his men had smelled from a hundred leagues off shore. "We think that they belong to the Orient by virtue of the surroundings, and that they are not without some kind of narcotic or aromatic liquor."

The quest for an "Eastern Sea" had brought the French to North Carolina. Gold brought the Spanish. Though the vast wealth of the Aztec and Inca empires preoccupied most Spaniards in the New World, a few conquistadors hoped to find comparable riches in the interior of North America. While the Spanish explorer Francisco Coronado explored the Southwest, Hernando de Soto led the hunt for treasure in the Southeast. His army of 600 soldiers plunged into the southern interior and became the first Europeans to see the southern Appalachian range and encounter its Indian inhabitants.

Exactly how far north de Soto's expedition penetrated remains a mystery. Accepted judgments have put Xuala near the present-day intersection of the South Carolina, North Carolina, and Georgia borders, but some scholars now locate Xuala much farther north, between Marion and Old Fort in McDowell County.

Despite a half-century of overland Spanish exploration of the Southeast, nothing was known of the Cherokees or of Spanish contact with them in Elizabethan England. There the idea of Verrazzano's Sea was still widely accepted. Sir Humphrey Gilbert, given royal permission to explore and settle the American coast, possessed a chart showing the vast gulf stretching from the Pacific to the Carolina Piedmont. When Gilbert was lost at sea in 1583, his half brother, Walter Raleigh, obtained the letters patent of his deceased relative and dispatched two barks to explore the region of Verrazzano's isthmus.

Leaving Plymouth, England, on 27 April 1584, Captains Philip Amadas and Arthur Barlow reached the Outer Banks on 13 July and claimed the land for Queen Elizabeth. Unlike Verrazzano, they located an inlet through the cape and were able to drop anchor in the sound near an island that "the Indians call Roanoak." (The Elizabeth II, a replica of a sixteenth-century sailing vessel, can be seen today at Roanoke Island Festival Park.) After six weeks of exploration and trade, they returned to England with favorable reports and two Indians, Manteo and Wanchese, for Raleigh and Elizabeth. On 6 January 1585, when Raleigh was knighted by the Virgin Queen and given permission to call the land Virginia in her honor, plans were already under way for a permanent settlement. 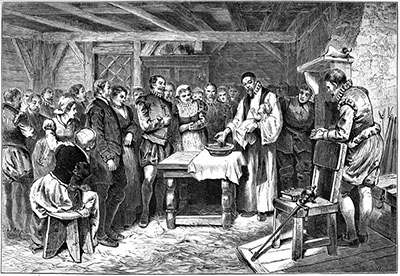 In the spring of 1587 another settlement was planned. Led by John White and including women and children, the party of 110 left the English port of Plymouth in May to establish "The Cittie of Raleigh in Vieginea." They intended to settle on the Chesapeake Bay, but their pilot, eager for privateering in the Caribbean, left them at Roanoke instead. In mid-August Elanor Dare, the wife of Ananias Dare and daughter of John White, gave birth to the first American child born to English parents. On 24 August the baby was christened "Virginia" in honor of the newly claimed land, and several days later her grandfather departed for England to procure much-needed supplies for the colony.

John White's efforts to return to Roanoke the following spring were foiled by the war between Spain and England and the threatened invastion of the Spanish Armada. He did not reach the Outer Banks again until 1590. Anxious to complete the long-awaited reunion, they "let fal our Grapnel neere the shore, & sounded the trumpet with a Call, & afterwardes many familiar English tunes of Songs, and called to them friendly; but we had no answer."

Before White's departure three years earlier, the colonists had discussed moving, and White had agreed with them that, should they move, "they should not faile to write or carve on the trees or posts of the dores the name of the place where they should be seated." They had also agreed that they would carve a maletese cross above the place-name if they were in distress. The next morning, White's men went ashore and found the letters "CRO" carved on a tree in "faire Romane letters." Farther inland, they located the palisaded enclosure where the settlers had lived, now overgrown with weeds and vines. A post to the right of the entrance had had the bark removed, "and 5. foote from the ground in fayre Capotall letters was graven croatoan withou any crosse or sign of distress."

White assumed his colonists had elected to migrate southward to Croatoan Island (modern-day Ocracoke south of Cape Hatteras), led by their Indian associate, Manteo. He hoped to find them there, but bad weather, the loss of vital cables and anchors, and the fears of sailors, six of whom had already been killed in the rescue attempt, prevented White from searching further. Because the hurricane season was approaching, he had no choice but to depart for England. On 24 October White's ship, having failed in its rescue attempt, "came in safetie, God be thanks, to an anker in Plymmouth."

It seems likely that at least some of the lost colony members did go south to live and intermarry with the native people on the Outer Banks. In the mid-seventeenth century, the Hatteras (or Croatan) Indians would migrate inland, like other small coastal groups at the same time. It is possible, though not certain, that members of the Lumbee tribe now living in the Lumberton area of Robeson County are descended in part from this Outer Banks contingent of Indians and English.

Some historians now believe that another contingent from Roanoke may have gone north to Chesapeake Bay, the colony's original destination, and settled among the Chesapeake Indians near Cape Henry in present-day Virginia. The Englishman William Strachey later claimed to have reports that Powhatan, chief of an Indian confederation, advised by his counselors to destroy the Chesapeakes and the English living with them, and had done so in 1607, at just the time that the Jamestown colonists arrived. The king of England had been informed, Strachey wrote, that Powhatan had "miserably slaughtered" the "men, women, and children of the first plantation at Roanoak ... (who 20. and od yeeres had peacably lyved and intermixed with thos Savadges, and were out of his Territory)." The Jamestown colonists were specifically instructed to look for survivors from the lost colony, and two men sent to Roanoke Island in 1608 brought back crosses and letters of English origin, but no other news.

Keep reading: Virginians in the Albemarle | North Carolina before 1770