Traveller and scholar Leo Africanus was born in Spain during the late fifteenth century. His education in Morrocco and travels to North and West Africa during the sixteenth century informed -- at least partially -- The History and Description of Africa, which was published in 1550. The History and Description of Africa was considered by Europeans to be the essential text about the African continent for four centuries, and Leo Africanus the essential expert on Africa and Islam.

One of the cities written about by Leo Africanus was the West African city of Timbuktu, located in present day Mali. Timbuktu was the center of the trans-Saharan trade route and was central to the spread of Islam throughout Africa from the 13th to 16th centuries. Because of Leo Africanus' portrayal of Timbuktu, the city was long considered fantastic, somewhere at the "uttermost end of the Earth," by Europeans.

Below are excerpts from Africanus' The History and Description of Africa where he describes the historic city of Timbuktu.

The name of this kingdom is a modern one, after a city which was built by a king named Mansa SuleymanThe term “Mansa” is a title equal to “king of kings.” Mansa Suleyman was the brother of Mansa Musa and ruled the Mali empire from 1341 to 1359. The date of 1232 CE listed by Leo Africanus is closer to the beginning of the Mali kingdom created by its first ruler, Sundiata. Leo Africanus visited Timbuktu 200 years later when the region was ruled by the Islamic Songhai kingdom. Today, Timbuktu is part of the country Mali, which takes its name from the ancient kingdom. in the year 610 of the hegira [1232 CE] around twelve miles from a branch of the Niger River.

The houses of Timbuktu are huts made of clay-covered wattles with thatched roofsA thatched roof is created from dry branches woven together, from one to two feet thick. The densely woven material makes a waterproof layer that protects the mud structure underneath. However, it is extremely flammable.. In the center of the city is a temple built of stone and mortarStone and mortar buildings in West Africa were made from dried mud bricks. Buildings such as these have lasted for hundreds of years in the arid climate, and are still in use today., built by an architect named Granata, and in addition there is a large palace, constructed by the same architect, where the king lives. The shops of the artisansAn artisan is someone who manufactures items for sale. Examples of West African artisans include blacksmiths, boat builders, pottery makers, and brick makers., the merchants, and especially weavers of cotton cloth are very numerous. Fabrics are also imported from Europe to Timbuktu, borne by Berber merchantsBerber merchants are Islamic nomads who transport goods, such as salt and gold, across the Sahara desert from West Africa to the Mediterranean seacoast. Many West African towns, like Timbuktu, grew up from oases to trading posts where the Berber merchants exchanged trade goods, including West African slaves..

The women of the city maintain the custom of veiling their faces, except for the slaves who sell all the foodstuffs.The women slaves “who sold foodstuffs” were most likely not Islamic, while the women who covered their faces were Muslims. It is against Islamic law for a member of the Islamic faith to enslave a member of Islam, or to hold or sell another member of Islam as a slave. A slave who converts to Islam will continue to be a slave but may eventually buy his or her freedom. Early West African kings employed Islamic scholars as court historians. Over time most of the powerful West African kings converted to Islam themselves and applied its laws in their kingdoms. The inhabitants are very rich, especially the strangers who have settled in the country; so much so that the current king has given two of his daughters in marriage to two brothers, both businessmen, on account of their wealth. There are many wells containing sweet waterSweet water is fit for humans to drink and does not contain bacterial contaminants. This water usually comes from natural springs or underground wells. in Timbuktu; and in addition, when the Niger is in flood canals deliver the water to the city. Grain and animals are abundant, so that the consumption of milk and butter is considerable. But salt is in very short supply because it is carried here from Tegaza, some 500 miles from Timbuktu. I happened to be in this city at a time when a load of salt sold for eighty ducats. The king has a rich treasure of coins and goldFor nearly 400 years, West Africa was one of the world's most profitable regions in gold production. Gold mining in the region and the gold trade with Berber merchants created vast wealth for West African kingdoms. Mansa Musa traveled across Northern Africa and the Middle East to Mecca from 1324 to 1325 with a caravan of thousands of followers and 100 camels loaded with gold. ingots. One of these ingots weighs 970 pounds.

The royal court is magnificent and very well organized. When the king goes from one city to another with the people of his court, he rides a camel and the horses are led by hand by servants. If fighting becomes necessary, the servants mount the camels and all the soldiers mount on horseback. When someone wishes to speak to the king, he must kneel before him and bow down; but this is only required of those who have never before spoken to the king, or of ambassadors. The king has about 3,000 horsemen and infinity of foot-soldiers armed with bows made of wild fennel which they use to shoot poisoned arrows. This king makes war only upon neighboring enemies and upon those who do not want to pay him tribute. When he has gained a victory, he has all of them—even the children—sold in the market at Timbuktu.

Only small, poor horses are born in this country. The merchants use them for their voyages and the courtiers A courtier is a person who attends to the needs or business of the king and government, or someone who is of close enough relation to the king or government to demand a special place in society. to move about the city. But the good horses come from Barbary. They arrive in a caravan and, ten or twelve days later, they are led to the ruler, who takes as many as he likes and pays appropriately for them.

The king is a declared enemy of the Jews. He will not allow any to live in the city. If he hears it said that a Berber merchant frequents them or does business with them, he confiscates his goods. There are in Timbuktu numerous judges, teachers and priestsThe judges, teachers and priests, of the Songhai kingdom that controlled Timbuktu when Leo Africanus explored the region were Islamic. As a result of their presence, especially the teachers, Timbuktu may have had a nearly 100 percent literacy rate among its free population. The nearby town of Djenne still has this high literacy rate today because all Islamic children must learn to read so that the can study and learn from the Koran (the Islamic book of religious teachings). Today, in modern West African towns like Djenne and Timbuktu, every Muslim can read and write the Arabic language., all properly appointed by the king. He greatly honors learning. Many hand-written books imported from Barbary are also sold. There is more profit made from this commerce than from all other merchandise.

Instead of coined money, pure gold nuggets are used; and for small purchases, cowrie shells which have been carried from Persia, and of which 400 equal a ducat. Six and two-thirds of their ducats equal one Roman gold ounce.

The people of Timbuktu are of a peaceful nature. They have a custom of almost continuously walking about the city in the evening (except for those that sell gold), between 10 PM and 1 AM, playing musical instruments and dancing. The citizens have at their service many slaves, both men and women.

The city is very much endangered by fire. At the time when I was there on my second voyage, half the city burned in the space of five hours. But the wind was violent and the inhabitants of the other half of the city began to move their belongings for fear that the other half would burn. There are no gardens or orchards in the area surrounding Timbuktu.The people of West Africa often plant agriculture products in "out-fields." These fields are often distant from an established town where the best farm land is located. Individual families may work out-fields or they may be farmed by a community or extended family unit. Leo Africanus may not have seen these areas because as an important guest the ruler of Timbuktu may have thought them to common a place for Africanus to visit. 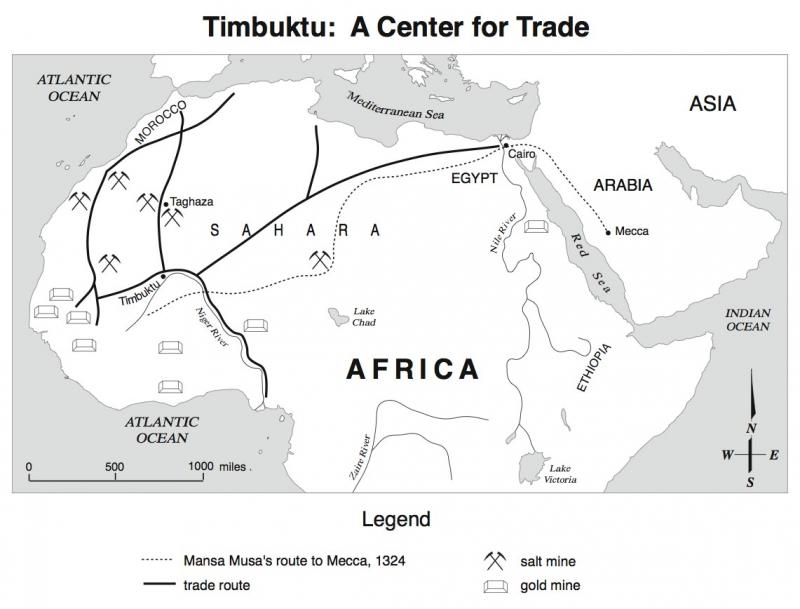 This map shows the various North and West African trade routes through Timbuktu. 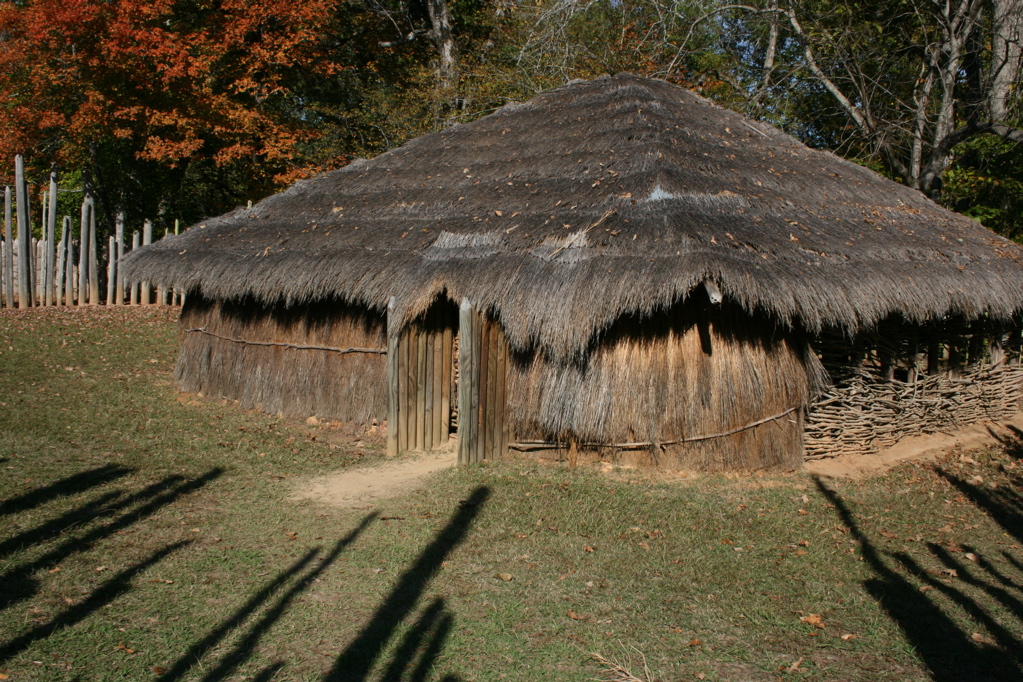 Many civilizations constructed structures using wattle and daub walls and thatch roofs. This is a temple that has been recreated at Town Creek Indian Mound.