A Letter to Brigadier General Rutherford

After the Rutherford Expedition concluded in September, additional expeditions were undertaken against North Carolina Indian populations. In his letter to General Griffith Rutherford, Captain William Moore provides details of his trek through Indian territories. A transcription of this letter -- written on 17 November 1776 -- is below.

A Letter to Brigadier General Rutherford:

Dear Sir -- After my Compliments to you, This is to Inform you, that Agreeable to your Orders I Enlisted my Company of Light horse men, and Entered them into Service the 19th of Oct. From thence we prepared ourselves and Marched the 29th Same Instant as far as Catheys fort, Where we Joined Capt Harden, of the Tryon Troops, and Marched Over the Mountain to Swannanoa.

The Next day Between Swannanoa & French Broad River we Came upon fresh Signs of five or six Indians, upon which we Marched very Briskly to the ford of Hominy Creek, where we expected to join the Tryon Troops. But they not Meeting according to appointment, we were Necessitated to Encamp and Tarry for them.

Our men being extremely anxious to pursue the aforesaid Indians, After the Moon arose we sent out a Detachment of 13 men Commanded by Capt Harden & Lieut Woods. They Continued their pursuit about 8 miles and Could Make no Discovery, Untill Day-light appear'd, then they Discovered upon the frost, that One Indian had gone Along the Road; they pursued Very Briskly about five miles further and came up with sdsaid Indian, Killed and Scalped him. The Remainder of them, we apprehended, had gone a Hunting off the Road, upon which they returned Back to Camp, where we waited to Join the Tryons. They Coming up Towards the Middle of the day we Concluded to stay (to Refresh our horses which was fatigued with the Over Nights March) till the Next Morning.

But to our Great Disadvantage we lost several of our Horses, which Detained us the Ensuing day. Then we pursued our march as far as Richland Creek, where we Encamped in a Cove for the Safety of our horses; but in Spite of all our Care, the Indians Stole three from us that Night by which we perceived that the Enemy was alarmed of our Coming.

We followed their Tracks the next day as far as Scots place, which appeared as if they were Pushing in to the Nation Before us Very fast & Numerous. From Scots place we took a Blind path which led us Down to the Tuckyseige riverThe Tuckasegee River through a Very Mountainous bad way. We Continued our march Very Briskly in Expectation of Getting to the Town of Too Cowee before Night. But it lying at a Greater Distance than we Expected, we were Obliged to tie up our Horses, & Lay by till

Next morning, when we found a ford and crossed the river, & then a Very large Mountain, where we came upon a Very plain path, Very much used by Indians Driving in from the Middle Settlement to the Aforesaid Town. We Continued our march along sd path about two Miles, when we came in Sight of the town, which lay Very Scattered; then we Came to a consultation to see which was the best Method to attack it. But our small army consisting of but 97 men, we found we were not able to surround it, So we concluded and rushed into the centre of the town, in Order to surprise it. But the Enemy Being alarmed of our coming, were all fled Save two, who Trying to make their Escape Sprung into the river, and we pursued to the Bank, & as they were Rising the Bank on the Other Side, we fired upon them and Shot one of them Down & the Other Getting out of reach of our shot, & Making to the Mountain,

Some of our men Crossed the river on foot, & pursued, & Some went to the ford & Crossed on horse, & headed him, Killed & Scalped him with the other. Then we Returned into the town, and found that they had Moved all their Valuable effects, Save Corn, Pompions, Beans, peas, & Other Triffling things of which we found Abundance in every house. The town consisted of 25 houses, Some of them New Erections, and one Curious Town house framed & Ready for Covering. We took what Corn we stood in need of, and what Triffling Plunder was to be got, and then set fire To the Town. Then we concluded to follow the Track of the Indians, which Crossed the river, & led us a Direct North Course.

We Continued our march about a Mile, and then we perceived a Great pillar of Smoke rise out of the mountain, which we found arose from the Woods Being Set on fire with a View as we supposed to Blind their Track, that we Could not pursue them; Upon which Capt Mcfadden & Myself took a small party of men in Order to make further Discoverys, and left the main Body Behind upon a piece of advantageous Ground until our Return. We marched over a Large Mountain & Came upon a Very Beautiful River which we had no Knowledge of.

We crossed the river & Immediately Came to Indian Camps which they had newly left; we went over a Second mountain into a large Cove upon South fork of sd river where we found a Great deal of sign, Several Camping places & the fires Burning Very Briskly. Night Coming on we were Obliged to Return to our main Body A While Before day.

When day appeared we made Ready and marched our men Until the place we had Been the Night Before. Our advance Guard being forward Perceived two Squaws and a lad, who Came down the Creek as far as we had Been the Night Before, and when they Perceived our Tracks they were Retreating to the Camp from whence they Came, which was within 3 Quarters of a mile. The Signal was Given, then we pursued and took them all three Prisoners. Unfortunately our men shouted in the Chase and fired a Gun which alarm'd them at the Camp & they Made their Escape into the Mountains.

The Prisoners led us to the Camp where we found abundance of plunder, of Horses and other Goods, to the amount of Seven Hundred Pounds. We took some horses Belonging to the poor Inhabitants of the frontiers which we Brought in, & Delivered to the owners. Our provisions falling short, we were Obliged to steer homeward.

That night we lay upon a prodigious Mountain where we had a Severe Shock of an Earthquake, which surprised our men very much. Then we steered our course about East & So. East two days thro' Prodigious Mountains which were almost Impassable, and struck the road in Richland Creek Mountain. From thence we marched to Pidgeon river, Where we Vandued off all Our Plunder.

Then there arose a Dispute Between me & the whole Body, Officers & all, Concerning Selling off the Prisoners for Slaves. I allowed that it was our Duty to Guard Them to prison, or some place of safe Custody till we got the approbation of the Congress Whether they should be sold Slaves or not, and the Greater part Swore Bloodily that if they were not sold for Slaves upon the spot, they would Kill & Scalp them Immediately. Upon which I was obliged to give way. Then the 3 prisoners was sold for £242The £ symbol stands for "pounds" or "pounds sterling." The pound is the official name of the standard of currency in Great Britain. The amount of £242 would be spoken as "242 pounds.". The Whole plunder we got including the Prisoners Amounted Above £1,100.

Our men was Very spirited & Eager for Action, and is Very Desirous that your Honnour would order them upon a second Expedition. But our Number was too Small to do as Much Execution as we would Desire.

From Pidgeon river we marched home and Every Man arrived in health and safety to their Respective Habitation. Capt Mcfadden is Going to see your Honor at Congress, and if I have been Guilty of a Mistake in my Information, it's possible he may Acquaint you better. Colo McDowell, Capt Davidson and me have sent for one of the Squaws this Day to come to my house, in order to Examine her by an Interpreter, and we will Give you as Good an account as we can Gather from her, concerning the state of the Indians.

Dear Sir, I have one thing to remark, which is this, that where there is separate Companys United into one Body, without a head Commander of the whole, I shall never Embark in such an Expedition Hereafter; for where every Officer is a Commander there is no command. No more at present. But Wishing you, Sir, with all true friends to Liberty all Happiness,

On the service of the United Colonies.

After the Rutherford Expedition concluded in September, additional expeditions were undertaken against North Carolina Indian populations. In his letter to General Griffith Rutherford, Captain William Moore provides details of his trek through Indian territories. A transcription of this letter -- written on 17 November 1776 -- is below.

A Letter to Brigadier General Rutherford:

Dear Sir -- After my Compliments to you, This is to Inform you, that Agreeable to your Orders I Enlisted my Company of Light horse men, and Entered them into Service the 19th of Oct." data-share-imageurl=""> 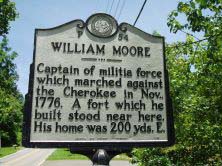 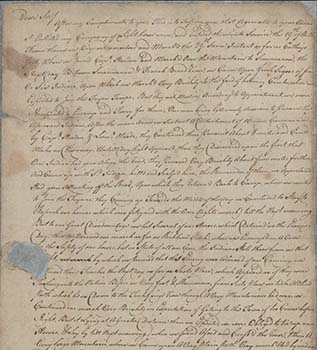 A scanned copy of the original letter from Captain Moore to General Rutherford is available in the Southern Historical Collection, Louis Round Wilson Special Collections Library, University of North Carolina at Chapel Hill.