In the Swann v. Charlotte-Mecklenburg Board of Education case, Charlotte was charged with maintaining segregated public schools and defying the Supreme Court's decision to desegregate public schools with "all deliberate speed". The Brown v. Board of Education decision was handed down in 1954. Seventeen years later in 1971, Charlotte-Mecklenburg public schools were not fully desegregated. The supreme court decided in 1971 that busing was a good method to achieve school desegregation. The court  also ordered the school board to create a tangible busing plan that would satisfy the court's goal of school desegregation. Lets take a deeper look into this historic case and its effect on students.

After busing was declared to be a legal tool for school desegregation. Adams v. Richardson case charged the department of health, education and welfare (HEW) with neglecting their duties to enforce Title VI of the Civil Rights Act of 1964. The courts required HEW to honor their obligations and responsibilities of the mandate given to it. Also, the courts ordered HEW to create policies that were consistent with school desegregation and withdraw federal funds from state’s not in compliance. The department of HEW split in 1979 with a separate Department of Education being created and HEW renamed as the Department of Health and Human Services.

Supreme Court of the United States, ruling in Swann v Charlotte-Mecklenburg Board of Education, April 20, 1971

The Charlotte-Mecklenburg school system, which includes the city of Charlotte, North Carolina, had more than 84,000 students in 107 schools in the 1968-1969 school year. Approximately 29% (24,000) of the pupils were Negro, about 14,000 of whom attended 21 schools that were at least 99% Negro. This resulted from a desegregation plan approved by the District Court in 1965, at the commencement of this litigation. In 1968, petitioner Swann moved for further relief based on Green v. County School Board, 391 U.S. 430, which required school boards to come forward with a plan that promises realistically to work... now... until it is clear that state-imposed segregation has been completely removed.The District Court ordered the school board in April 1969 to provide a plan for faculty and student desegregation. Finding the board's submission unsatisfactory, the District Court appointed an expert to submit a desegregation plan. In February 1970, the expert and the board presented plans, and the court adopted the board's plan, as modified, for the junior and senior high schools, and the expert's proposed plan for the elementary schools. The Court of Appeals affirmed the District Court's order as to faculty desegregation and the secondary school plans, [p2] but vacated the order respecting elementary schools, fearing that the provisions for pairing and grouping of elementary schools would unreasonably burden the pupils and the board. The case was remanded to the District Court for reconsideration and submission of further plans. This Court granted certiorari and directed reinstatement of the District Court's order pending further proceedings in that court. On remand the District Court received two new plans, and ordered the board to adopt a plan, or the expert's plan would remain in effect. After the board "acquiesced" in the expert's plan, the District Court directed that it remain in effect.Held:

Burger, Chief Justice, delivered the opinion for a unanimous Court.

Supreme Court of the United States, ruling in Swann v. Charlotte-Mecklenburg Board of Education, April 20, 1971. 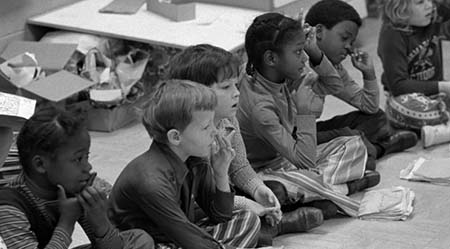