An Act to Encourage the Settlement of America (1707)

By the turn of the eighteenth century, the settler population in North America was nearing 300,000. The British had laid claim to land spanning from present-day Maine to present-day Georgia. Census data gathered by the British Colonial Government suggests that Virginia was home to 70,000 settlers in 1700, while estimates suggest that North Carolina was home to less than 10,000 10,000 is generous; some estimates put the population of North Carolina at only 5,000 in 1700. European settlers.

North Carolina's smaller population was a sticking point; it made communication, travel, and trade throughout the colonies more challenging. The natural geography of the state's coast combined with the sparse population created the perfect refuge for pirates and enemies of the crown. And so, in 1707, An Act to Encourage the Settlement of This Country [Carolina North] was passed in an effort to encourage more emigration into the territory, declaring that it was possible to be forgiven of crime or debts in many circumstances if one were willing to settle in North Carolina. A transcription of the resolution is below.

Referred to in Colonel Seymours Lre of the 16 Augst last. 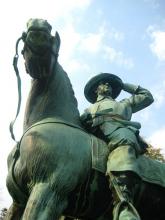 Lt. Lewis of Massachusetts defended his colony against not only the French and Indians but also, according to his statue, “the prowling wolf.”