A Plea for Supplies

This letter from Confederate officer Samuel Hoey Walkup to North Carolina Governor Zebulon Vance describes the pitiful situation of Confederate troops in the fall of 1862.

From the beginning, the Confederacy was ill prepared for war. The Confederacy did not have a large supply of arms or ammunition and hoped to import the necessary tools of war from Europe. Most Confederate soldiers brought their own guns to war. The South also lacked factories for producing clothing or shoes, and by the middle of the war, soldiers were in desperate need of both. Food, too, became scarce as the Union blockade prevented the South from importing necessities from the Caribbean and Europe.

Making matters worse, the South had a much smaller population than the North, and most of its able-bodied men were eventually drafted into the army. This left few men at home to help grow food. Prices soared during the war, and the government had to pay extraordinary prices to speculators who bought up food and resold it at a great profit -- or else simply confiscate the much-needed supplies.

By the end of the war, the lack of food, clothing, and equipment motivated thousands of men to leave the army. Not only were they starving and suffering, but the lack of supplies indicated to soldiers that their cause was hopeless -- if the South couldn’t even provide soldiers with shoes, it was unlikely that the Confederacy would be victorious.

As you will read in the letter transcribed below, the army was having trouble supplying its troops only a year and a half into the war.

I lay before you for your consideration the destitute condition of our Regt. with the hope that you, who have experienced some of the severe trials of a soldiers life, may hasten up the requisite relief --

In truth there is one Compy (I) having 66 men & only Eleven Blankets in the whole company -- The pants are generally ragged & out at the seats -- & there are less than three cooking utensils to each Company -- This sir is the condition of our Regt. upon the eve of winter here among the mountains of Va. cut off from all supplies from home & worn down & thinned with incessant marchings, fighting & diseases -- can any one wonder that our Regt. numbering over 1250 rank & file has more than half its no. absent from camp, & not much over one third 449 of them fit for duty? The country is filled with Stragglers, deserters, & sick men & the hospitals are crowded from these exposures. A spirit of disaffection is rapidly engendering among the soldiers which threatens to show itsef in general Straggling & desertion, if it does not lead to open mutiny.

Add to this that our surgeons have no medicines & don’t even pretend to prescribe for the sick in camp, having no medicines & you have an outline of the sufferings & prospective trials & difficulties under which we labor....

What we most pressingly need just now is our full supply of Blankets, of Shoes & of pants & socks. We need very much all our other clothing too. But we are in the greatest need of these indispensable articles & Must have them, & have them Now. Otherwise how can the Government blame the soldier for failing to render service, when it fails to fulfil its stipullated & paid for contracts? A contract broken on one side is broken on all sides & void....

The soldiers of the 48th N.C. & from all the State will patriotically suffer & bear their hardships & privations as long as those from any other State, or as far as human endurance can tolerate such privations, But it would not be wise to experiment to far in such times & under such circumstances as now surround us upon the extent of their endurance. With Lincolns proclamation promising freedom to the slaves, What might the suffering, exhausted, ragged, barefooted, & dying Non slaveholders of the South, who are neglected by their government & whose suffering families at home are exposed to so many evils, begin to conclude? Would it not be dangerous to tempt them with too great trials?

Dear Sir... I feel the very earnest & solemn responsibility of my position as commander of this Regt. at this critical period & under these trying circumstances & wish to do all I can... to remove the evils by seeking a speedy supply of Blankets, Shoes & clothing. & therefore beg your earnest attention to the premises & your zealous & I hope efficient aid to supply our necessities.... 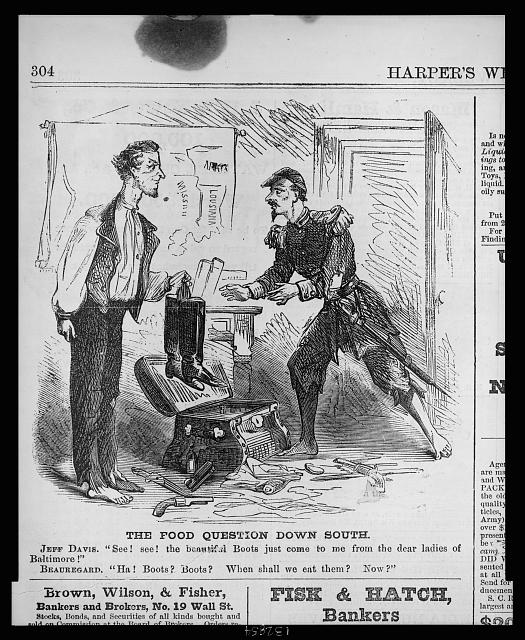 Editorial cartoon from May of 1863 showing Jefferson Davis, president of the Confederate states, offering a new pair of boots to General Beauregard who, though barefoot, asks when they can be eaten.