The Quakers and Anti-Slavery

The Religious Society of Friends, popularly known as Quakers, were the first religious group to wholly condemn slavery. Records capturing their anti-slavery beliefs date back to the seventeenth century. Quakers became leaders of the abolitionist movement in the 1770s and continued their efforts even after abolition in 1865.

One Quaker who was well known for his efforts in abolition and assistance escaped slaves was Levi Coffin. Coffin was born in Guilford County, North Carolina in 1798 to a quaker family and demonstrated his anti-slavery principles as early as fifteen. By the time Coffin was 23, he and his cousin began a school to teach enslaved people how to read, which was popular with its students. So popular was the school, in fact, that many masters became averse to the idea of it and prohibited attendance. By the time he was 28, Coffin had left the South and settled in Indiana. It was in Indiana that Coffin and his wife, Catherine Coffin, worked to shelter and transport slaves to freedom on the Underground Railroad. Coffin is often referred to as the "President" of the Underground Railroad, and his autobiography -- published in 1867 -- details his efforts as an abolitionist and supporter of equity, as well as the efforts of other quakers. Excerpts from Coffin's autobiography, Reminiscensces of Levi Coffin, pertaining to the his work and the work of other Quakers to end slavery are below.

During the time I was engaged in teaching, I was not idle in anti-slavery matters. The subject of gradual emancipationThere were different versions of gradual emancipation. The most common proposal was to liberate all children born of enslaved people when they reached the age of 21. Until the age of 21, the child would belong to the slave master, but the child could not be sold. Anyone over the age of 21 would remain a slave until his or her death. Some Northern states, such as Rhode Island and Connecticut, had tried gradual emancipation in the 1770s and 1780s. Within a few decades, though, the states passed laws that freed all slaves., or manumission of slaves, was agitated in various parts of the State. A paper, called the Greensboro Patriot, was started at Greensboro, edited by William Swaim, a young man of rare talent. He advocated the manumission of slaves, and though he met with a storm of opposition and was assailed by other papers, he continued his course boldly and independently. He received letters from various parts of the State full of threats and warnings. These he published in his paper, and replied to them in editorials. Many public speakers and writers engaged in discussion with him, but they could not cope with him, and generally retired from the combat much worsted.

Some plan of gradual manumission was the theme of general discussion at that day, but none of the advocates spoke or seemed to think of immediate and unconditional emancipation. Manumission societies were organized in different counties. The first, I believe, was organized at New Garden, Guilford County. I was a member of it, and can well remember the proceedings. We also had several State Conventions, which were largely attended, and at which addresses were delivered and speeches made, by prominent men. The various branches were represented by delegates. The first convention of this kind was held at Jamestown, in Guilford County, and William Swaim, editor of the Greensboro Patriot, took an active part in the proceedings. His cousin Moses, a lawyer of Randolph County, delivered a lengthy and able address, which was afterward printed and widely circulated. It was a strong abolition speech, and would not have been allowed a few years laterIn the aftermath of Nat Turner's rebellion, Southern states, including North Carolina, banned abolition publications as a way of limiting the effect of abolitionist societies. People could still believe in and discuss abolition, but they could not circulate publications calling for the freedom of slaves.. Several lenient slaveholders united with us in those meetings, and advocated plans for gradual manumission. About this time the same subject was agitated in East Tennessee, and similar societies organized in that part of the State.

Benjamin Lundy, of that locality, started a paper, called the Genius of Universal Emancipation, which I subscribed for and read as long as it was published. At our next convention, which was held at New Garden Meeting-House, Elihu Emory and James Jones, of East Tennessee, attended as delegates from that State. Both were active members of the Society of Friends -- able men and good speakers. The last convention that I attended was held at General Gray's, in Randolph County. He was a wealthy man and owned a number of slaves, but was interested in our movement. The meeting was held in his large new barn, which was covered but not weather-boardedTo weatherboard a barn, a person would nail overlapping boards horizontally on the structure. It helped to keep wind and rain out of the building., and which afforded ample room for the assembly. Quite a number of slaveholders were present who favored gradual manumission and colonizationMany people, including white abolitionists and free African Americans, called for the relocation of free blacks to Africa. Some white people believed that black people were inferior to whites and could never fully integrate into American society. Others recognized that black people faced racism and discrimination in America, and believed that by moving to Africa, former slaves could enjoy more prosperity than if they remained in the United States. Many African Americans felt that because their ancestors had been forced to leave Africa, returning to the continent would right an old wrong. Other African Americans wanted to leave the racial segregation and oppression they faced in the United States and live in a nation of which they could be full citizens. During the nineteenth century, thousands of free African Americans moved to Liberia in the west coast of Africa and established a colony.. They argued that if the slaves were manumitted, they must be sent to Africa; it would not do for them to remain in this country; they must return to Africa, and this must be made a condition of their liberty. A motion was made to amend our constitution, so that the name of our organization would be, "Manumission and Colonization Society." This produced a sharp debate. Many of us were opposed to making colonization a condition of freedom, believing it to be an odious plan of expatriation concocted by slaveholders, to open a drain by which they might get rid of free negroes, and thus remain in more secure possession of their slave property. They considered free negroes a dangerous element among slaves. We had no objection to free negroes going to Africa of their own will, but to compel them to go as a condition of freedom was a movement to which we were conscientiously opposed and against which we strongly contended. When the vote was taken, the motion was carried by a small majority. We felt that the slave power had got the ascendency in our society, and that we could no longer work in it. The convention broke up in confusion, and our New Garden branch withdrew to itself, no longer co-operating with the others. Our little anti-slavery band, composed mostly of Friends, continued to meet at New Garden until the majority of the members emigrated to the West, preferring to live in a free State. 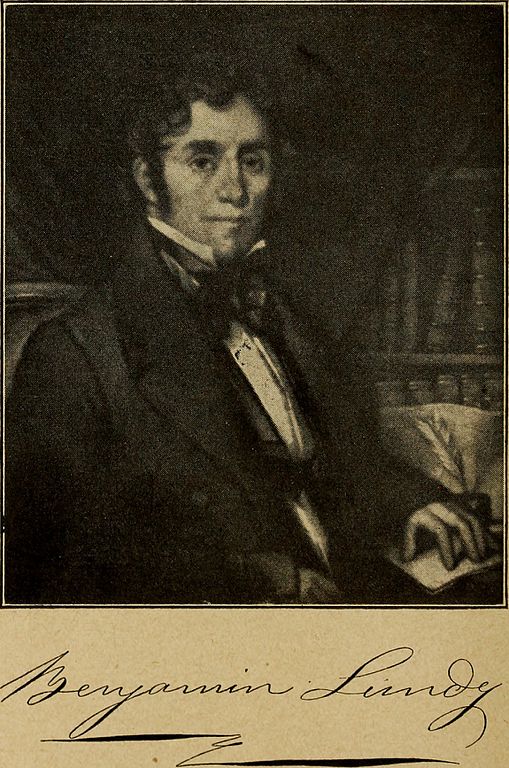 Benjamin Lundy was a Quaker Abolitionist who published the Genius of Universal Emancipation newspaper.